Walt Disney often paired Frank Thomas and Milt Kahl for the animation of a single character.
Pinocchio, Bambi (with Ollie), Cinderella's Duke, Tramp, Merlin and Mim as well as King Louie, to give you a few examples.
The talents of these two Super Animators complemented each other extremely well.
Milt of course would do the final design, and as you know his animation would be
flawlessly staged and timed, and show inventive acting.
Frank internalized the character, which resulted in very nuances performances.
They often showed their scenes to each other for input. Frank would come up with an idea to plus the acting, and Milt would draw over Frank's keys to solidify his drawings and add charm.
The first sheet below shows some of Milt's early design doodles, based on poses from story sketches. It's interesting to see that a black color area around one eye was considered for a rowdier look.
The next image is a layout/staging drawing for one of Milt's scenes.
Tramp is greeting a puppy through the window of a pet shop. Look how these two characters relate in the way they are posed.
The two key drawings following are by Frank for his legendary Spaghetti sequence.
I call this glorious character animation. See the tied down pencil test here:
http://vimeo.com/4215426
The single Tramp close up is by Milt, done for Frank for the same sequence.
It gives the scene that polished charm.
The last drawing was also done by Milt for a Frank scene.
Team work at it's best!
At the end of the post you'll find a tied down Milt pencil test of Tramp, as he first appears in the movie. 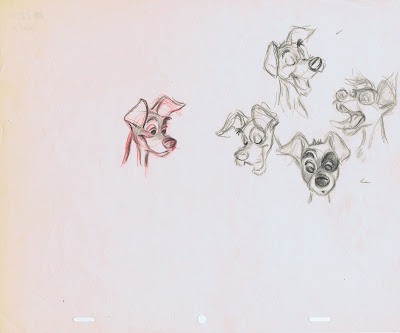 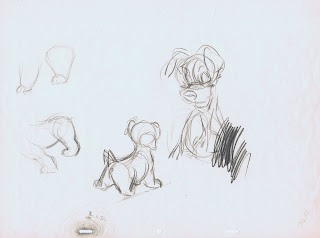 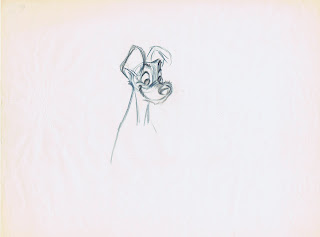 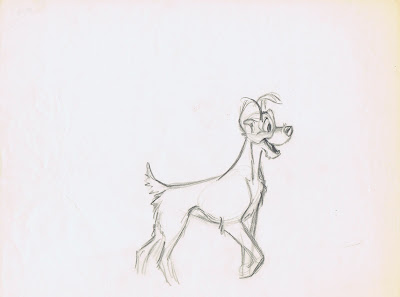