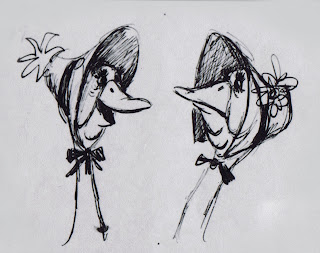 In June of 1969 these concept drawings by Ken Anderson were photographed and reproduced as reference for any artists who would be working on these two geese sisters in story and animation.
The movie was The Aristocats, and the script called for a couple of English geese, who are on a walking tour of France. These two are easily amused and tend to laugh at their own jokes. Their main purpose in the story is to accompany the cats on their way back to Paris. 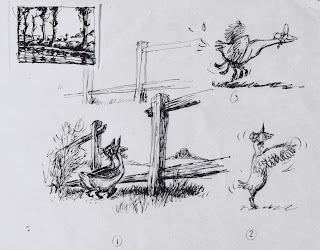 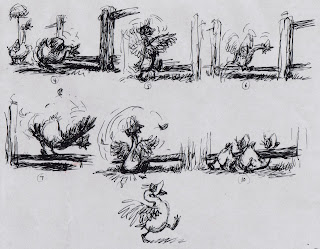 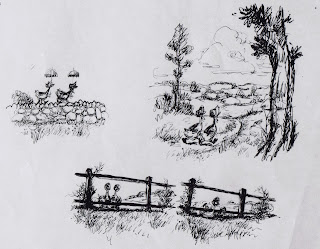 Milt Kahl was next in line to  add his touch to the visual development of these characters.
I can't quite figure out the following two sheets, who show a completely different conceptual direction for the geese. The drawings are hilarious, though these sketches look somewhat like ducks. The dishevelled attitudes remind me of Uncle Waldo, who almost got marinated in white wine at Le Petit Cafe.
Perhaps Uncle Waldo was an Aunt at one point, and that's what Milt explored here. Beautiful drawings! 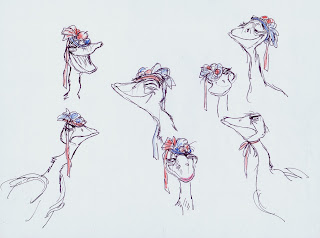 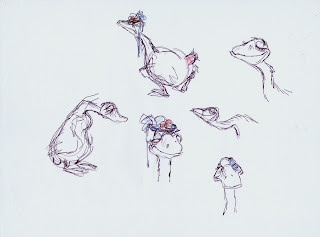 And then Milt just hits a slam dunk! These are among my favorite Kahl exploratory  sketches.
Now this is a goose!!
With a fantastic facial caricature of the animal. The body is bottom heavy and bow-legged.
I have looked at this sheet for hours.
I see a goose in France, I can almost taste the Foi gras, the proportions are exquisite.
A little masterpiece in design development. 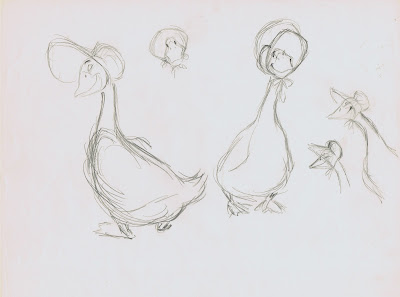 Ollie Johnston looks at Milt's ideas, but looses something as he redraws the poses.
The longer neck is fine, but this is a skinny goose. And the head doesn't have that perfect simplicity. 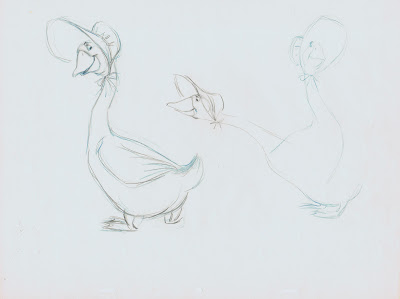 As Ollie explores the proportions more, he eventually ends up adding the body bulk that makes for a good goose design.

By the time he gets into animation, his drawings become more solid, and the acting is terrific. 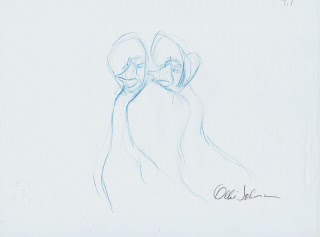 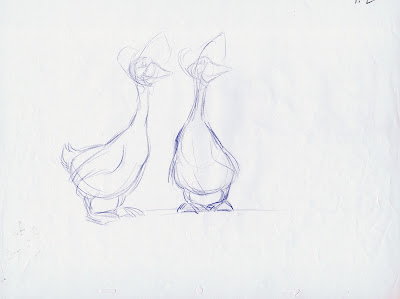 These are Ollie's motion studies based on looking at live action footage.
The sequene of the goose walking toward camera is worth taking a look at.
You have the foot contact, then the body's weight shifts toward that side, while head and neck counterbalance. Of course all this needs to be exaggerated in the character animation. 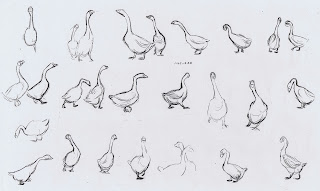 Here is a photo from a magazine article, showing Ollie and Milt holding cats, while director Woolie Reitherman and Frank Thomas watch John Lounsbery, as he tries to put a bonnet on a goose.
But what's Mickey doing there? 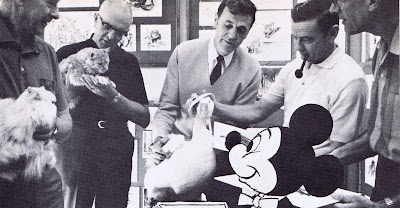