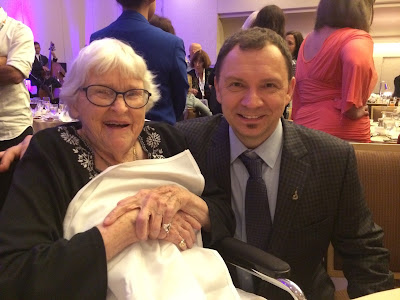 During the Legends Lunch a little over a couple of weeks ago I was happy to see a true Disney Legend, Ruthie Thompson. The first time I met Ruthie was five years ago, when she visited Disney Animation Studios, she had then just celebrated her 100th birthday. She truly validates the notion that most animation artists enjoy a long life. In this photo you are looking at a vivacious lady at 105.
Ruthie started at Disney in the Ink & Paint department during the production of Snow White. About a decade later she transferred to animation checking and scene planning, a department she would later supervise. Scene planning was very much involved in the technical aspects of multiplane scenes such as the flight over London in Peter Pan.
A while back I asked her what one one of her most challenging assignments might have been. She paused for a second and and said that the opening scene from Sleeping Beauty took a lot of brain work, since there were endless characters involved on endless cel levels.

How can you not love Ruthie Thompson ?!

Here is a link to a recent Vanity Fair article, featuring Ruthie and other Ink & Paint artists: