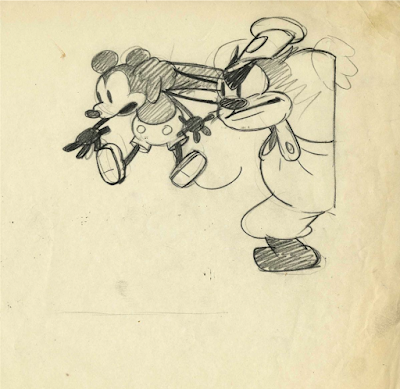 Two images from different eras in the development of Mickey Mouse.
The first one is from Steamboat Willie, 1928. A gorgeous animation drawing by Ub Iwerks, who animated the whole short. There are still graphic issues here that needed to be addressed, like the characters' black hands. You can't really see how Pete's grip on Mickey is defined. That's why later on  Disney characters were given white gloves for clarity.
Boy, I just love the energy in this fantastic sketch.

Twelve years later Mickey appeared as The Sorcerer's Apprentice in Fantasia, 1940, looking like this.
A new eye unit with pupils, draughtsmanship that showed real volume and shoes borrowed from Snow White's Seven Dwarfs.
There is greatness in both versions. Steamboat Willie shows the beginning of true, involved personality animation, while Mickey Sorcerer showcases the immense possibilities of the animated medium. 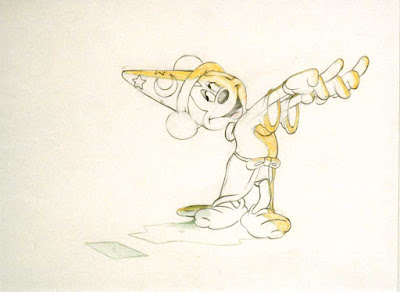