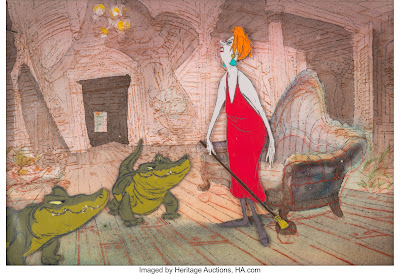 This is a pre-production cel set-up from The Rescuers. Actually one element in it is production, and that's Medusa. Milt Kahl had already animated her as she gets off the sofa and moves toward the door  in the back, with hilarious dance steps.
The alligators Nero and Brutus aren't developed yet as final designs. Milt just scribbled these poses so a color model artist had something to work from for an experimental color scene test.
The layout's line work (which doesn't line up here with the painted shapes) is brown, it was later changed to grey to match the character's xerox outlines.
Some of the film's night scenes are presented in old fashioned black xerox.

Milt himself wasn't a fan of the movie's art direction. "You never knew what time of day most sequences were played, whether it was night or day", he criticized later.

Here is a link to an earlier post about Nero and Brutus. I love Milt's animation on these heavy reptiles: