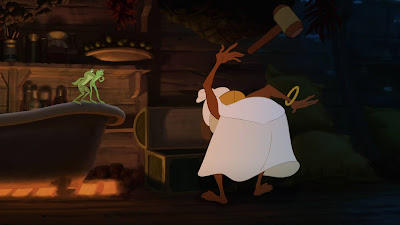 I remember having a moment of animators' block during production of The Princess and the Frog.

In one scene during her song "Dig a little deeper" Mama Odie was searching through a chest, looking for  appropriate "musical instruments" for some of the other characters present. As she begins to dig in, the layout artist suggested that she throws out a shoe and a gavel at first.

The thing is that I had time for Mama Odie to throw ONE more item. So what should that be? A book, a piece of clothing, a plant....boring! For the life of me I could not think of anything clever (even though audiences would not really have the time to register the third object). I was starring at my animation disc forever...and then...of course, she will throw an animation disc.

I did not tell anybody about my choice, not the directors, not checking, nobody. AND IT WENT THROUGH. No phone call...what is this?...we can't have her do this...Everybody within the Disney pipeline knew exactly what this item was. By coloring the disc blue meant that this was a vintage metal animation disc. (The ones we worked on were black plastic.)

Mama Odie had some serious voodoo powers, but... she was also a 2D animator. 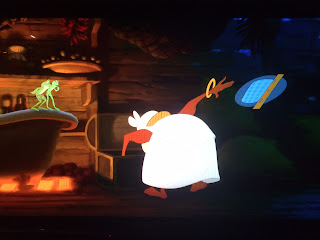 In order to find that frame I just took a cell phone pic off of my TV.
Posted by Andreas Deja at 1:14 AM