A Message from Bruce Reitherman 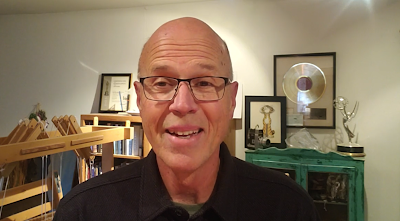 A few weeks ago Bruce Reitherman sent a video with him reminiscing about voicing Mowgli for the 1967 original Jungle Book. This of course was done in connection with the upcoming exhibition at the Walt Disney Family Museum: Walt Disney's The Jungle Book, Making a Masterpiece.
It opens to the public on June 23, and I can't wait to walk Bruce as well as Darleen Carr, Clint Howard and Floyd Norman through the exhibit.
Below is a pic with Bruce during a recording session with his father, director Woolie Reitherman. 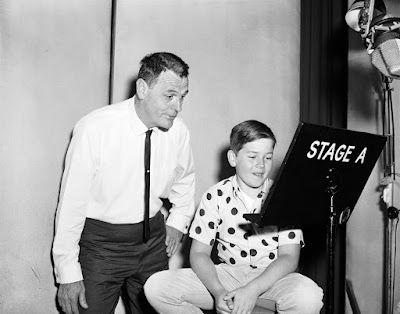 Here are a few comments by Bruce from a 2013 interview for the English Express:

"I was about 12 years old when this photo was taken. It was 1967 - the summer of love - and I was recording the voice of Mowgli in Disney's The Jungle Book. I remember I just loved that spotty shirt.

I'm with my dad, Wolfgang Reitherman, who directed the film. Working with my dad wasn't a big deal for me and recording Mowgli was fun, although you had to take it very seriously and come prepared to give it your best shot.

The voice of Mowgli required something special, in the sense that he had to be absolutely ordinary. It had to feel like a really average kid.

You had all these big personalities - people like George Sanders as Shere Khan, Sebastian Cabot as Bagheera and Louis Prima as King Louie - but Mowgli needed to have a sympathetic quality to make him someone you cared about.

The film took four years to make, and when I was recording I used to get out of school do to it, which was a real treat. I didn't have many friends at that age, but some kids knew what I was up to.

It's only since I've grown up and my generation have had children that I've really appreciated what a great thing I was involved in. that film is going to live on for ever - there's a copy of it at major film museums all over the world.

It's a piece of 20th-century art, and having been a part of it, you can't help but feel proud.

The film took four years to make, and when I was recording I used to get out of school do to it, which was a real treat.

I have a daughter now, Camilla, who's 10 years old. She loves to sing and dance - she's quite the performer, which I think she inherited from me. She's seen The Jungle Book many times and it's one of her favourites.

When we watch it together, there are moments when I might have a little flash of memory from those days, and there are times when my daughter will look at me and say, 'that was you!' But in general we just enjoy it as a piece of entertainment.

Much of the original cast have passed away now but Richard Sherman, who composed most of the songs, is a friend of the family and I still see him frequently. My father was one of Walt Disney's original "nine old men", the animators who worked with him in the early days, and they're all gone too.

But I'm a cinematographer now, and I still connect with members of the animation team who were just starting out at the time of The Jungle Book.

Disney is like a family. that doesn't mean there aren't difficulties, trials and tribulations, but it's a family that sticks together to look after the bare necessities."

A publicity still as Bruce is having a laugh with Kaa and his drawn alter ego. 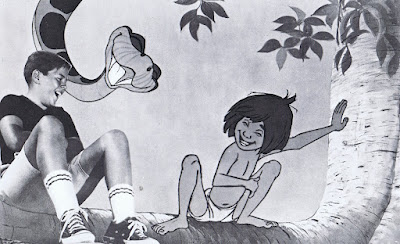 Here is the link to Walt Disney's The Jungle Book, Making a Masterpiece:
https://www.waltdisney.org/press-room/walt-disneys-jungle-book-making-masterpiece
Posted by Andreas Deja at 12:18 AM