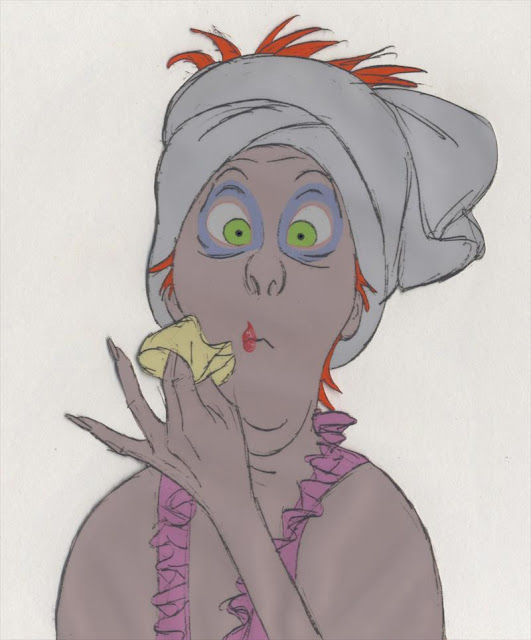 After leaving Disney Studios and before moving up to San Francisco, Milt Kahl reminisced about his work on Madame Medusa during a lecture. Here are a few interesting points relating to the amazing image above.

- Milt was a big proponent of the grey xerox line. To him it resulted in a slightly softer representation of the character animation. (During night scenes Medusa's cels were xeroxed in black, which makes perfect sense.)

- Originally the upper part of the towel wrapped around her head used to have the words "H O T E L    R I T Z" embroidered. The idea being that Medusa had swiped the towel from the hotel.
Only one scene shows the embroidering, when she removes her right false eyelash (screen left).

-There were several test cels being painted to explore the final look of Medusa's eyes after the removal of her false eyelashes. Milt was finally happy with what you see here. The outlines of her eyes were inked in flesh color, signaling that there aren't any of her natural eye lashes left at all.
Graphically this makes for a stronger "before and after" statement.

- Medusa's lipstick was painted on top of the cels, unlike the rest of her colors. In this image you can detect some tiny white specs on the half wiped off lipstick. The actual film frame doesn't show this.
But because a pile of cels used to include tissue paper between each cel for protection, some painted areas stuck to the tissue after filming. That's what you see here.

This cel is currently being offered at Howard Lowery:
http://auction.howardlowery.com/bidding.taf?_function=detail&auction_uid1=4736296