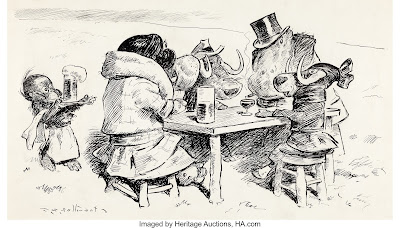 I do own a few TS Sullivant originals, but not this one. It was offered by Heritage Auctions late last year.
Just like every Milt Kahl drawing, each Sullivant illustration represents an adventure in humorous, graphic exploration. EVERYTHING is entertaining, the animals' anatomy, the insane sense for caricature, staging and on and on.
The caption is very funny, too. Here is what Heritage said about the piece:

Thomas Sullivant Life Magazine Illustration Original Art (Life Publishing Company, 1921). Before LIFE magazine was purchased by Henry Luce in 1936 and become the long-running photo-magazine American institution it is remembered as, it started in 1883 as a humor magazine similar to the British Punch. This whimsical cartoon illustration from 1921 features only a portion of the caption, but in it, Mrs. Hippo asks Mrs. Gnu how her children are. Mrs. Gnu replies that one of them has gnumonia, to which Mrs. Hippo says that is "bad gnus". At least this Dad-joke has charming artwork crafted in ink on an oversized 25.5" x 17.25" sheet of Bristol board. Signed in the lower left of the image area. Toned, with edge wear, torn caption, and a missing bottom left marginal corner. In overall Very Good condition.

Over the years I have posted numerous times on Sullivant's art. Here is the first one: