This story sketch showing how Shere Khan extends his claws in front of Mowgli is by Vance Gerry.
Its gets a little tricky when a four legged big cat needs to act human like with its front paws.
The pose tends to look unnatural and even off balance when the acting is shown as a full body shot.
Milt Kahl knew this. So whenever Shere Khan rubbed his paw against his chest or clapped in applause, he chose a medium close up in his animation.
The animal character becomes human for a few moments, and it looks more believable in this type of fielding.
This is a general rule and there are exceptions. Earlier when Shere Khan first approaches Kaa, he pulls the snake's tail down to the sound of a door bell. It's a funny gag, and the tiger is shown in a full body long shot. 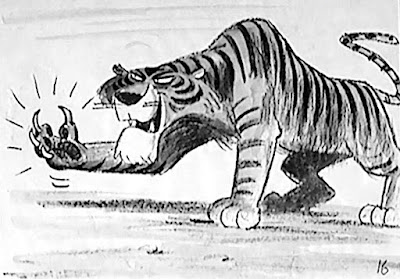 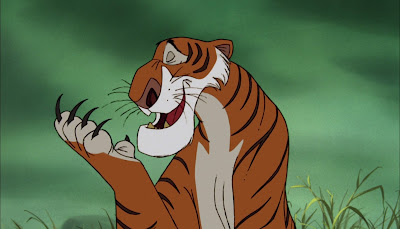 I became aware of this staging issue when animating certain scenes with Scar.
Here he is talking to Simba about a "Father/Son......Thing".
I animated his left paw rotating as if Scar is looking for a certain word: "Thing".
On that word he flicks his paw, to show a sense of banality and slight disgust.
I love working this kind of stuff out.
This scene wouldn't have looked right if we had chosen to show his full body. 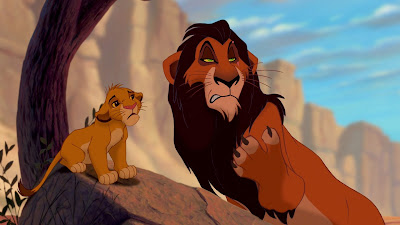