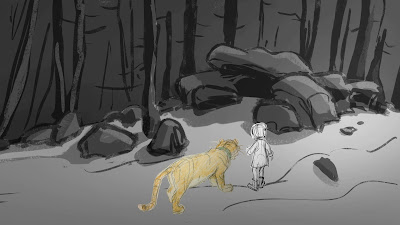 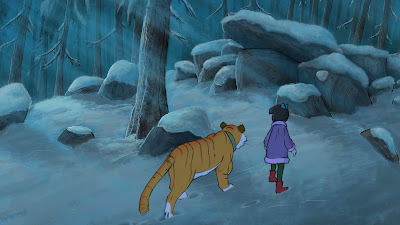 Images © Mushka Productions
Here is an example of a scene from the upcoming film MUSHKA that shows how we were able to cut corners, and still end up with superior results. The first image is basically a story sketch. Matthieu Saghezchi drew the scenery, I added the character poses.  Courtney DiPaola animated this emotional scene beautifully. We have NO rough layout and NO clean up layout on this production. We are going from story sketch straight to final background (which is crazy.). That background was pained by Craig Elliott. Craig added beams of moonlight, which create a multiplane effect during the camera move.
You can do this sort of thing with top talents only. Everybody is trying to plus what's been given to them.
My team on this movie is tiny...but extraordinarily talented.
Did I mention that we are almost done?
Posted by Andreas Deja at 2:45 AM