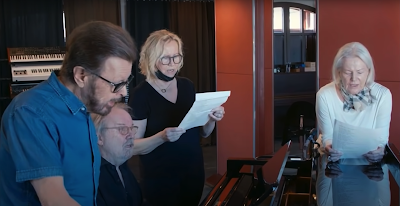 First of all, let me tell you, not all is scary and bad in the world when we have a situation like this one appear out of nowhere. Did not see this coming, absolutely thrilled!!

I have never talked about this, so it's kind of an exclusive:  Sometime in the mid 1980s I suggested to Disney Animation's management to consider the guys from ABBA ( Benny Andersson and Bjorn Ulvaeus) to lend their musical genius for any upcoming Disney animated production. You know what? The studio DID get in touch with them. Unfortunately at that time the guys were busy with their brilliant theatrical musical CHESS, the West End as well as the Broadway production. Bad Timing.

Don't get me wrong, I am super thrilled with what happened instead. Howard Ashman, Alan Menken, Elton John and Tim Rice. They all did brilliant work for our movies. Actually Tim Rice wrote the lyrics for the London West End version of CHESS. So there is another ABBA connection.

I can't help but wonder if timing had been different, what musical treasures we could have had with ABBA songs in Disney animated films.

Then again....it's not too late to ask them now.