The Old Disney Guard and our Films 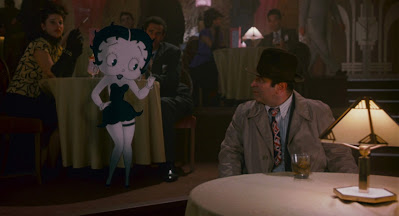 I think I mentioned before that I used to ask Disney's original animators about their opinion regarding animated films I was a part of. After you ask the question you kind of want to run for cover, in fear that harsh criticism would come your way. Still, I was curious.

Here are a few recollections about what the "Old Guys" thought after having watched films from Disney's revival period. Milt Kahl enjoyed The Great Mouse Detective, he thought the film had a fresh approach in terms of storytelling and character development.

The Little Mermaid was pretty much liked by the old guard. The studio invited Frank and Ollie for a screening when the film was about half animated. At one time Frank interrupted with an excited voice: "Who did that one?" He was referring to a little reaction shot of Ariel. Somebody informed him that David Pacheco had animated this scene. When this got back to David he was on cloud nine of course...and probably still is.

Ken Anderson liked Beauty and the Beast very much. He said he couldn't think of a way to improve it. Chuck Jones also raved about the film, particularly Glen's animation of the Beast.

I don't remember specific reactions to Aladdin. I think Frank and Ollie had a few quibbles with the story, but nothing major. Marc Davis objected to the fact that Robin Williams was allowed to improvise his dialogue for the Genie. "We never had our voice actors ad-lib anything!" He thought that this type of dialogue would date the film in years to come. As for myself, I got two thumbs up for Jafar from Frank and Ollie.

The Lion King got a few "not so nice" reactions. Frank and Ollie disliked watching Mufasa's dead body after the stampede. "I think we handled the death of Bambi's mother better by not having her on screen after the gun shot." Frank commented. Marc Davis was displeased with the animation of the lions. "When we drew Bambi, you felt every bone in the deer's body, it was believable!" Our lions reminded him of the appearance of plush toys.

I forgot one title, Who Framed Roger Rabbit. Frank and Ollie despised the concept of animated characters (Toons) being looked at as annoying, and being banned to a ghetto like Toontown. That concept went against their personal philosophy about animation. Ward Kimball thought that everything just moved too fast :"The only one character who held still and I could read was Betty Boop". Who was animated beautifully by Roger Chiasson.