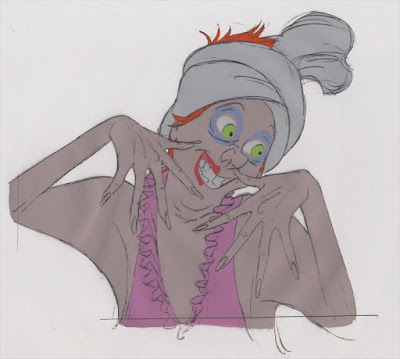 What a great cel of Madame Medusa from The Rescuers. Milt Kahl was very concerned about how the final cels with his animation would turn out. In the end he was very happy with certain visuals that mattered to him. During a conversation with Penny Medusa has taken off all of her eyelashes. At this point Milt wanted to show no eyelashes at all, not even her natural ones. The xerox line defining the edges of her eyes was eliminated, and a flesh colored ink line was added. This is all about contrast. Big eyelashes at first, then none at all. That's a clear graphical statement.

Earlier on Medusa removed half of her lipstick, and again, that side of her mouth doesn't show any lip definition at all! Contrast, contrast!

To some viewers this might be gross looking, and it is, but sooo in character. I just love this sequence.