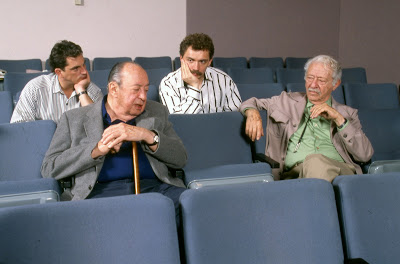 We had just screened a work in progress version of The Prince and the Pauper for two Disney icons, Marc Davis and Joe Grant. Here they are commenting on story, animation and general entertainment. This is 32 YEARS AGO!!! That might be the reason why I don't remember one thing these two legends said. At that time I had been at Disney for 10 years. And I was so lucky to have gotten to know Marc and Joe, but also Frank and Ollie, Kimball, Milt and of course Eric Larson.

That's Dan Rounds on the left, the producer of the film. He not only imitates my pose, but also my sense of fashion... ;)