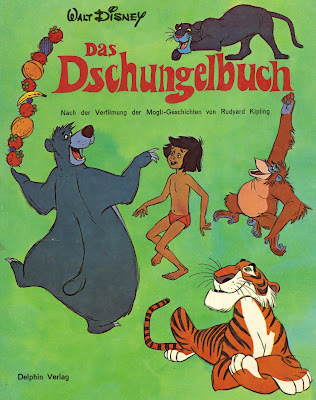 I treasured this oversized German edition of The Jungle Book. After having seen the film at age 11 (my first Disney movie), it is no overstatement to say that my life changed forever.

This was for me, this was what I was going to do, become a Disney animator...and everyone around me called me nuts. I didn't even blame them. The idea of leaving Germany, moving to the US and working for Walt Disney Productions seemed pretty outrageous...and probably unachievable. And yet, I thought it wouldn't hurt giving it my best effort to try and see what might happen.

The reason I liked this book was because it included actual film stills. There were other Dschungelbuch publication with newly painted illustrations. I did not like any of those, it had to be the real thing. Only original artwork gave me a window into the film, artwork I studied endlessly and enthusiastically. Whenever a magazine published stills from the film, I would cut them out and add them to what became a scrapbook.

Years later after I had started working at Disney I asked many artists who had worked on the movie to sign my book. Those were surreal moments! Everyone looked for a page to sign that included some of their art. Dave Michener cleaned up the publicity drawing below from a rough by Milt Kahl. 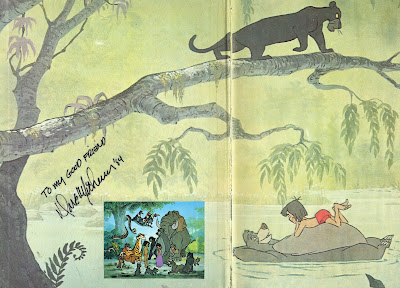 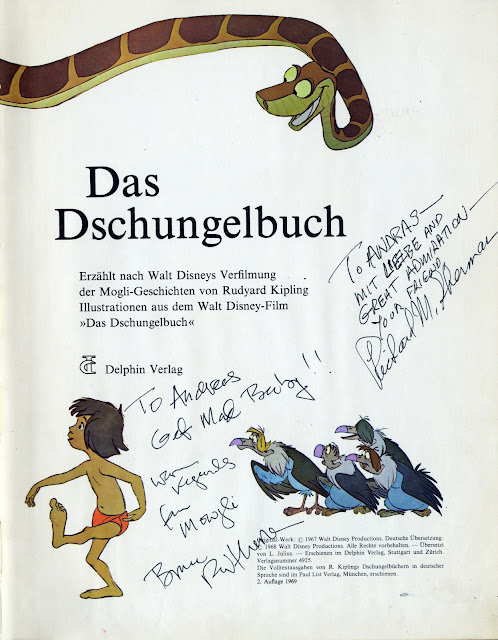 Bruce Reitherman and Richard Sherman. I told Bruce that the German voice of Mowgli was pretty good, he gave me a funny look as if this would take away from his own vocal efforts. And the idea of working sometime with Richard on a project of my own...geeez. 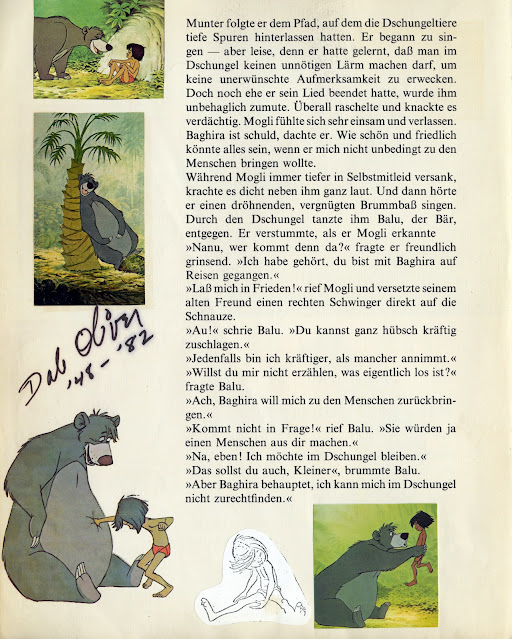 Dale Oliver did a lot of clean up work for Frank and Ollie scenes with Baloo and Mowgli. 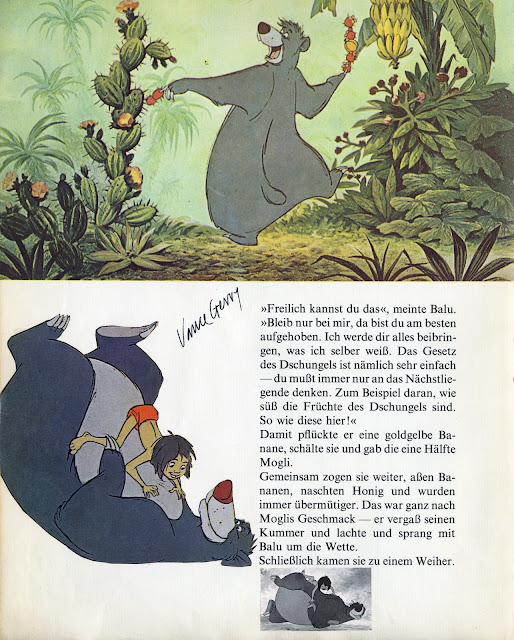 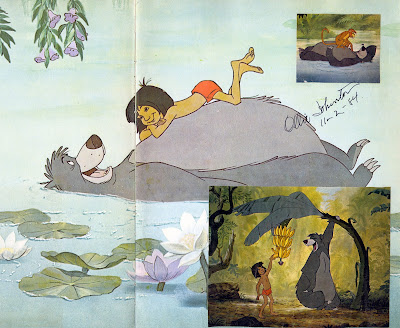 I believe Ollie did more animation than anybody else on the film. 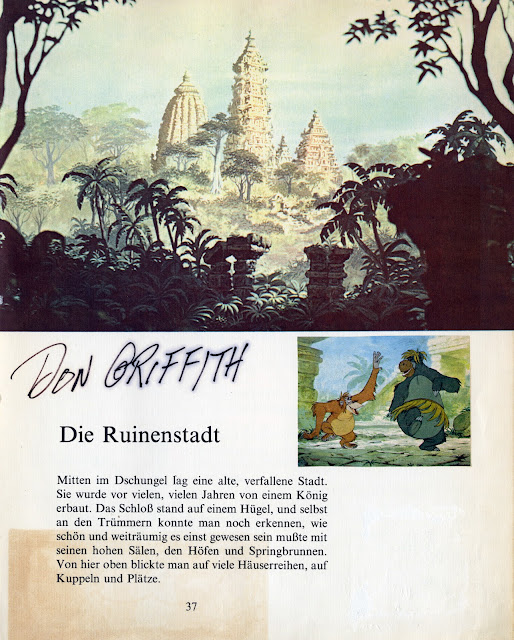 The incredible Don Griffith created the layout for this famous multiplane scene. 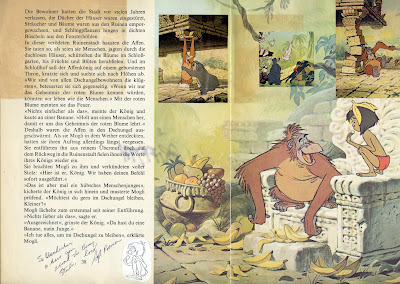 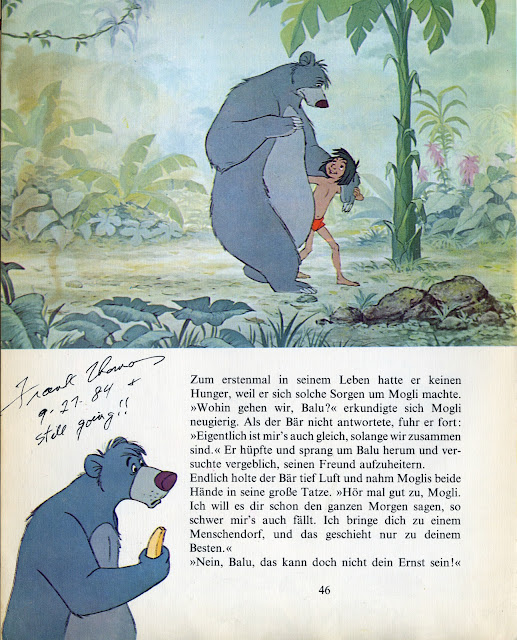 Frank Thomas of course focused on complex emotional scenes like these. 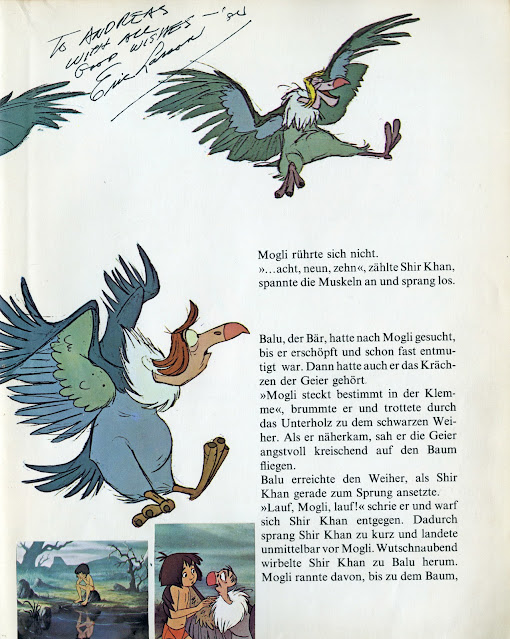 Eric animated a few scenes with the vultures, but not what is published here. 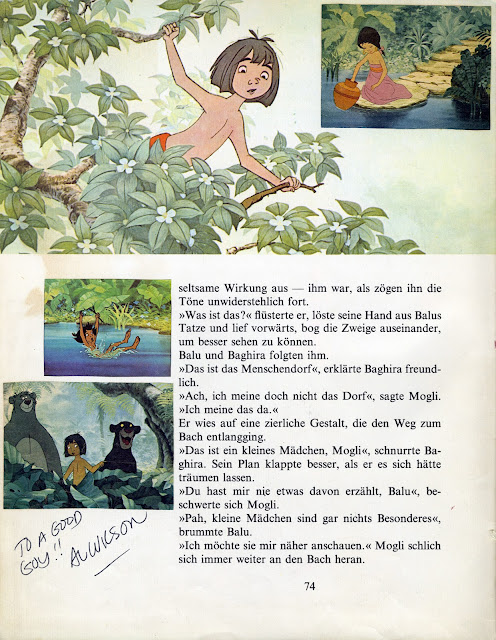 Al Wilson was an unassuming story artist...with strong convictions. He would return to Disney years later to work on The Black Cauldron. 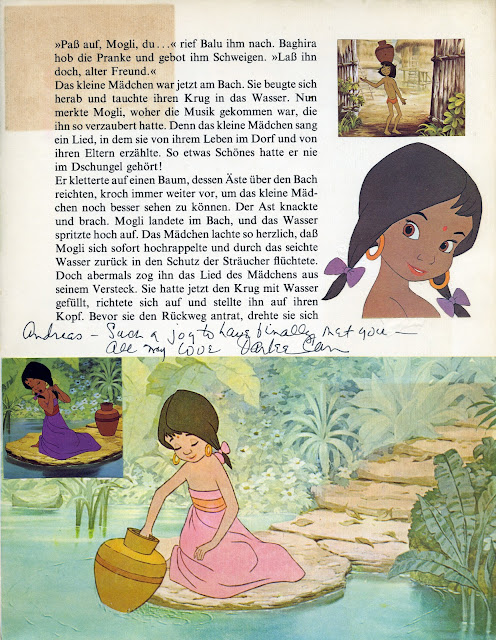 The wonderful Darleen Carr, who recently attended the opening for The Jungle Book exhibition at the Walt Disney Family Museum.