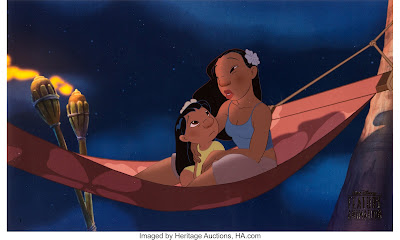 I don't think I have ever told this story before. It is a bit personal. But to me it was also kind of revelatory when it happened.

In 1999 I  was working on the character of Lilo at Disney's animation studio in Orlando/Florida. One evening an acquaintance of mine from LA was visiting, and he asked me to join him for dinner at a Disney World restaurant. At one point during dinner he asked me what I was animating at the moment. I started to describe the sequence pictured here. Nani and Lilo are having a moment in a hammock at night after Nani had gotten fired from her job. Lilo doesn't understand what her sister is trying to tell her. The two of them would not stay together anymore, because the next morning child services would take Lilo. Nani had failed to be a guardian of her little sister. (She was drawn by the great Stephane Sainte-Foi.)

The scene I had just finished animating was when Lilo wobbles from one side of the hammock toward Nani to comfort her. I kid you not when I admit that I got all teary eyed just talking about this moment in the film. My mind went..wowowo..hang on here, this has never happened before when talking about my work. What the heck?

I reflected on this later on and realized that this (fictitious) little character had gotten a hold of me emotionally. And this was the kind of footage you animate from an internal place, almost with tears in your eyes.