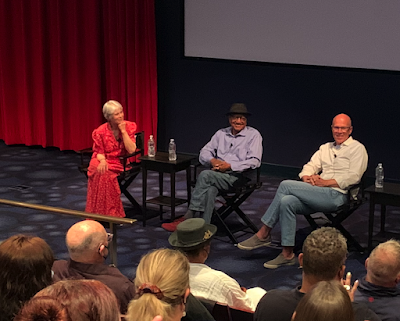 We had an amazing panel last Wednesday as part of The Jungle Book exhibition opening at the Walt Disney Family Museum.

Lovely Darleen Carr talked about her contract with Disney during the time of The Jungle Book. Walt was looking for a young lady who might walk in the footsteps of Hailey Mills, who had begun filming non Disney projects in the UK.

Floyd Norman talked about his luck being pulled into the story department, after the departure of Bill Peet, who created the original, somewhat dark version of the film. Floyd helped storyboard the sequence where Kaa hypnotizes Mowgli during the song "Trust in Me".

Bruce Reitherman comes from a unique perspective because his father directed The Jungle Book. He talked about working with his dad, but Bruce also put the film into an American historical context. The Vietnam war was still raging, and yet people seemed to be ready for some kind of temporary relief, like The Jungle Book.

Europe, Asia, who is ready to take on this extraordinary exhibition after its San Francisco run?