Marc was a lot of fun to be around. He and his wife Alice enjoyed the company of young artists,
and it was always a treat to get invited to their house in the Los Feliz area of LA, very near the location of the old Hyperion Disney Studios.
Marc loved telling the story when he bought the house in the mid fifties and told his boss :
Hey Walt, I bought a place near the old studio, to which Walt responded:
Hell Marc, we're not moving back THERE !

His home was and still is a museum. He loved the designs of New Guinea artifacts,
and had brought them over from the islands. His own sketches depicted their costumes and rituals.

I thought you might enjoy more animation from "Sleeping Beauty".
Marc had skipped "Lady and the Tramp" in order to focus on two characters,
Aurora and Maleficent.
Both very difficult to animate because of their degree of realism. But by that time Marc had become somewhat of an expert in animating female characters, or Leading Ladies, like he called them.
Starting with Snowwhite herself, Marc had supervised her clean up look and did a little bit of animation. He later designed and animated Cinderella, followed by Tinker Bell and Alice.
So animating the female form wasn't anything new to him, but Maleficent turned out to be a challenge. Marc would say that she stood around and gave speeches in most of her scenes.
That means not much is happening physically with the character, so you need to work with facial expressions and hand gestures in a very subtle way.
Frank Thomas thought that a lot of the drawing power in Marc's Maleficent animation got lost in clean up.

Below are scans of a few animation keys. Maleficent is about to leave the prince alone in the dungeon. The raven became a nice "prop" and gave her something to do with.

The pencil test shows Aurora, when she tells the fairies that she is in love.
I can't get over the way Marc designed her hair...Art Deco curls. 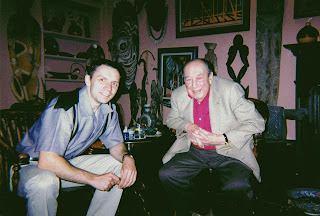 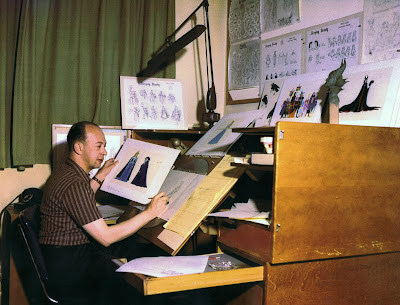