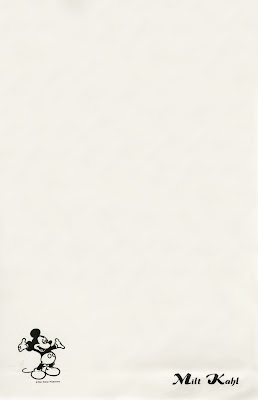 All supervising animators at Disney had personalized note pads, like this one by Milt Kahl.
The sheets were small size, just enough to put down a note, the animator might leave at someone's desk, or send through interoffice mail.
I was delighted when Milt's daughter Sybil recently sent me a note written on her dad's "Disney stationary".
Below is a key drawing from one of Milt's many extraordinary scenes for The Jungle Book.
I have spent a long time studying these vultures interacting in this shot. One of them, Ziggy, is determined to investigate the man cub Mowgli, who happenes to pass through their surroundings.
All four birds are lined up in a tree, when Ziggy starts pushing Dizzy, who then puts Buzzie out of balance and so on. In the end all four buzzards plunge down toward Mowgli.
The scene is on one's and incredibly involved as far as one character's actions affecting another, it is beautifully animated and proves that Milt Kahl is one of the hardest working animators of all time. 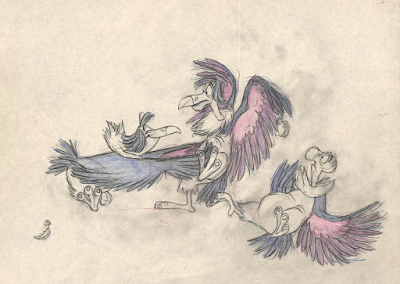 I will have more key drawings from this remarkable scene in the near future. It should have been featured in the Milt Kahl chapter of my book!