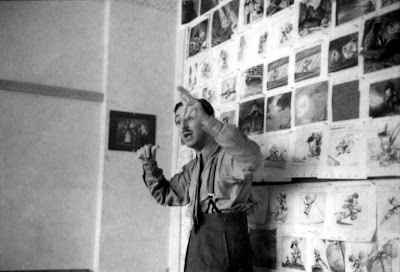 Another excerpt from a UK TV show featuring the life of Walt Disney.
In this clip Marc Davis and Frank Thomas describe what an asset Walt was when it came to getting a hold of an animated character.
I remember Ollie Johnston telling me how Walt acted out Baloo's entrance, dancing, finger snapping and singing. Next time you watch that sequence from The Jungle Book think about Walt Disney as the inspiration for the character.
If you want to know who Walt Disney really was, just listen to the artists who worked with him.
They are the ones who tell you the truth !!