You've probably seen some of those vintage gag drawings that were done at Disney way back. They usually poke fun at something that had happened between animators, occasionally even Walt was portrayed in a satirical sketch. Milt Kahl and Ward Kimball kept huge files of those drawings.
In the 1995 documentary film Frank and Ollie Frank Thomas revealed several gag drawings that involved him and Ollie . Pretty funny stuff.
Perhaps my generation of animators wasn't as quick with gag artwork, but we drew them, too.

Years ago I was one dollar short when paying for my lunch at the commissary. So my buddy Nik Ranieri lent me a buck, I told him I'd pay him back tomorrow. Months later I found this drawing on my desk. 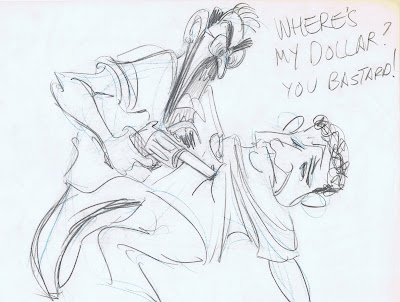