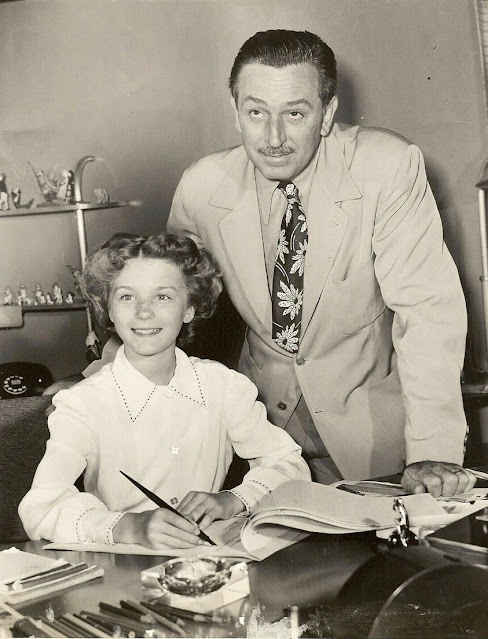 June 13, 1949: "DISNEY SIGNS THE 'VOICE OF ALICE, BURBANK, CAL....Kathryn Beaumont, 11-year-old English girl, is shown as she signed a contract as the voice of Alice in Walt Disney's lavish cartoon feature production of 'Alice in Wonderland'. Kathryn is the daughter of British actor-singer Kenneth Beaumont. Disney (who stands beside her) gave her a voice test and was immediately captivated. It was originally intended for Margaret O'Brien to play the voice."

Today is Kathryn Beaumont's birthday. I was lucky enough to celebrate with her and a few friends while enjoying a wonderful brunch at one of her favorite local restaurants in Studio City.

Kathy is doing great. She was happy that our LA pandemic lockdown has recently been lifted, and that it is now possible to socialize with -vaccinated- friends again. (Here's hoping it will stay that way.)

At the restaurant we witnessed a few teens being completely consumed by looking at their cel phones. We had a giggle when I asked her if she, as a former school teacher, would be able to have her pupils put down their phones in class and pay attention. Her answer was: "I don't know...I really don't know."