I won't have any new posts for one week. I will be on the Disney Wonder cruise ship, where I'll give a few talks on Disney animation.
In the meantime  here are a couple more character panels.
Among personal favorites would be the pre production drawing of Wart. He looks more caricatured here than he does in the movie. I really like this version of him, and I had the chance to ask Milt Kahl about this early design. He said, Walt made me change it, he thought it wasn't appealing enough.
Hmmmm.... personally I prefer this drawing of Wart, it just has more character and personality in my opinion.
I also like the Marc Davis drawing of Aurora next to him. The angle of her head would be very difficult to pull off, but she looks beautiful here.
Across the page is a funny drawing of Pongo and Roger. They are reacting to the news of all those newborn puppies, and their expressions make them both look alike.
Pecos Bill on Widowmaker is by Ward Kimball, who must have had a ball doing this character.
I  don't know who drew the centaur for "Fantasia",  but I sure like the boldness in this pose.
I'll be back in a week with development art for Cruella de Vil and Madame Medusa. 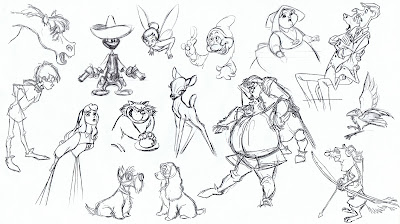 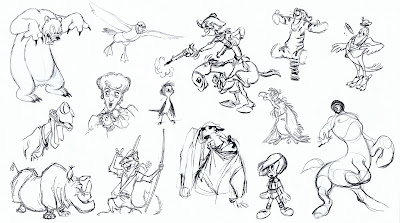