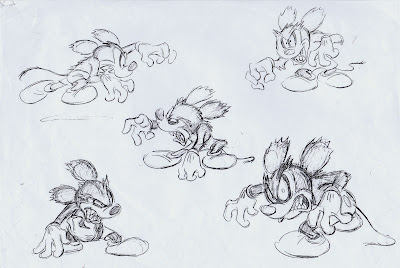 This short film was produced right after Lion King, but not at the Burbank studio.
A group of very talented artists in Paris/France had completed work on The Goofy Movie for Disney, and the plan was to have this terrific French studio be part of Feature Animation's films.
To start out it was decided to do a short with Mickey. Endless ideas were thrown around, but nothing seemed to stick. Then story man Tim Hauser had the idea to do a satire on the old Frankenstein story. I had too much fun sketching little Mickey monsters, like the ones above, before animation.
I was lucky to be sent to Paris along with a small group of supervisors. My job was to animate but also help supervise the animation as a whole.
Let me tell you, there was no hand holding necessary on my part, the French animators were fantastic. They were Bohlem Bouchiba, Uli Meyer (from London), Chris Bradley (from the US),
Dominique Montrey, Sylvain Deboissy, Sergio Pablos, Patrick Delage, Catherine Poulin, Marc Eoche Duval, Yoshimichi Tumara and Stephane Sainte-Foi.

I ended up animating a few opening scenes with Mickey and Pluto, the introduction of mad scientist Dr. Frankenollie and other shots here and there.
One scene was a bit challenging, but a lot of fun.
Minnie is hugging Mickey because she mistakenly thinks they are going to Hawaii on vacation.
Mickey, shocked over this misunderstanding, pronounces the word "Hawaii" silently.
It was an unusual bit of acting for him, but I think it communicates.

These are a few of my rough animation keys from the opening scene. I remember animating the cord coming from Mickey's remote control, something that normally an effects animator would take care of. I really enjoy doing effects work once in a while. 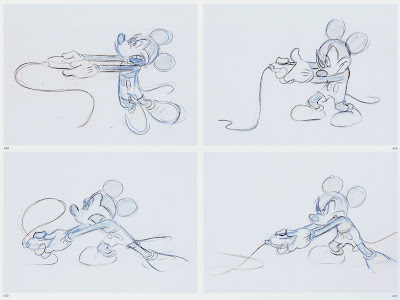 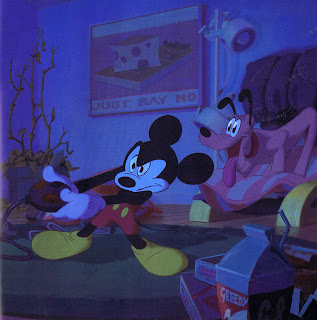 The short was art directed by Ian Gooding and I think it looks beautiful.
A couple of pages from the Disney book "Mickey Mouse, My Life in Pictures". 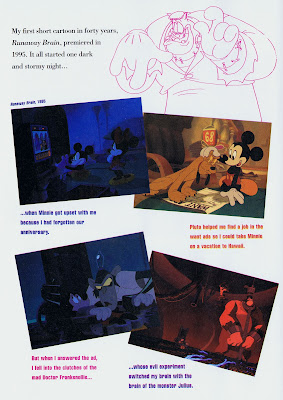 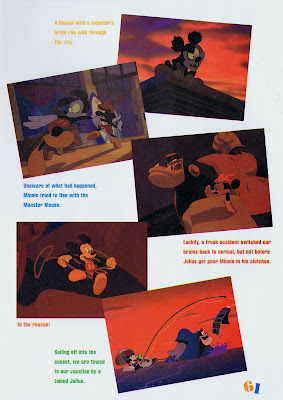 Soon after the release I got my hands on a cool looking toy figurine from Japan. 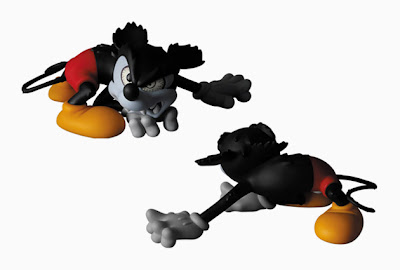 This was the back of our crew jackets.
I wore it once while visiting Disneyland Paris, when suddenly a Disney sales person commented on the image, which she found outrageous. I tried to explain about the movie, but she insisted I shouldn't be wearing something like this in the park. She thought it was a counterfeit product.
Adorable…the way she was defending Mickey's image! 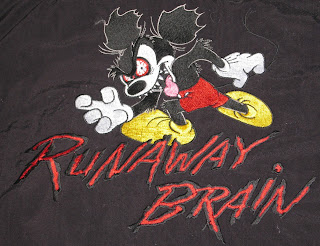 By the way, at the time I thought director Chris Bailey paced the film a little too fast, but watching it now, it feels just right.
You can find it on the Walt Disney Treasures DVD Mickey Mouse in Living Color, Volume Two.