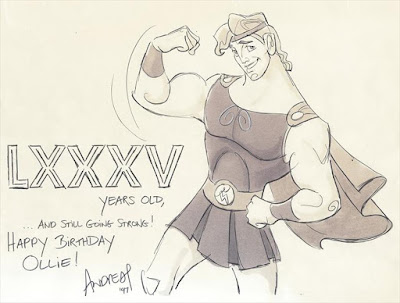 I did this drawing for Ollie Johnston in 1997 when he was celebrating his 85th birthday, which is on Halloween, October 31.
The reason I am thinking about Hercules right now is because I just returned from a screening of the film at Hollywood's vintage El Capitan theater. The movie palace is currently screening all of John Musker's & Ron Clements' animated films, leading up to their brand-new and first CG Disney movie Moana.
As far as my impressions regarding the animation in Hercules, Nik Ranieri's Hades and Ken Duncan's Meg sure stand out. My character Hercules as well as some of the others seem to work best when not "over animated", meaning when the acting reads clearly and feels natural. Some of the scenes I animated way back hold up, while others scream to be done over again. For some reason the sentimental scenes I did still work for me, when Herc is being humiliated by Hades, or when he is coping with Meg dying. Some moments with Meg at night on their first date look ok, too.