I found these beautiful animation drawings printed in a vintage Disney Animation publication.
They are the work of the "über" talented Bill Tytla.
Boy, these were done at a time, when moving the character's masses, not lines, was on the animators minds. That's why this squash and stretch feels so dimensional and believable. During this "take" the whole arc of Doc's body is being reversed, his head moves backwards while his belly comes forward. 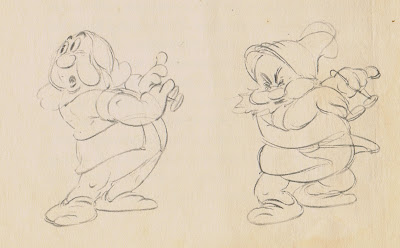 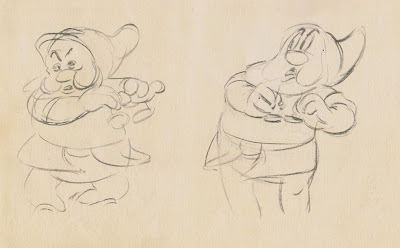 Tytla drew pretty rough when he got into a character's personality. Strong gut feelings on paper. That meant that his clean up assistant had his work cut out for himself, as you can see in the last image.
There are all kinds of refinements going on here, as well as a few alterations. Fingers needed to be more detailed, the edge of the beard was lowered to avoid tangents with the hands, and even the overall weight was placed on Doc's left leg by adding an s-curve to his belt line.
This assistant knew what he was doing, because he had to keep track of the movement of these changes. Way back these great guys really had to know how to draw on model as well as how to animate.
A lot of unsung heroes, who didn't get screen credit for their important contributions to the Disney Classics. 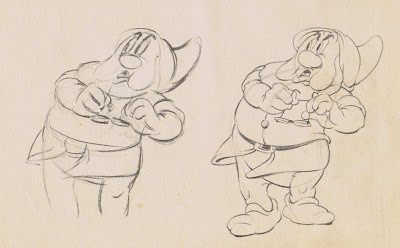