I have a mixed bag today.
To start off, here are a bunch of Milt Kahl ruffs of Merlin, King Louie, Shere Khan, George Hautcourt and Edgar from "The Aristocats".
These are scans of copies of the original key drawings.
Waaayyy back I had the chance to talk to Woolie Reitherman about Milt's work on
"Sword in the Stone". Woolie said:"When I first saw Milt's animation of Merlin, I told him that theses drawings are so good, you could hang them in a museum. But Milt just said, aah you're full of it."   Except he didn't say "IT".
I would have to agree with Woolie, there is a perfection in Milt's drawings that is astonishing. They hold up beautifully as single pieces of illustration.
But Milt also got criticized for this by other animators:
"Oh, Milt is only interested in the drawing aspect, his acting falls flat."
Look at the drawings of King Louie, when I saw those for the first time, I noticed that here his eyes are smaller than the version in the film, and he has less hair on his head.
I asked Milt about this and he said:" Walt didn't like his beady eyes, he wanted them larger and he also asked for more hair on his head. I just threw the already animated scenes to my assistant Dave Michener and told him: YOU change it!"
Switching gears again with a photo.
Alright...laugh you guys!!
Last March a few friends of mine were visiting from Paris, and part of their trip included a stop over to Las Vegas to see Celine Dion's show, amongst other things.
They invited me to come along, and I thought wouldn't it be cool to meet her before or after the show. I remembered of course that she sang the Pop version of "Beauty & the Beast" withy Peabo Bryson.
So I turned to Disney for help to make this meeting possible. It all worked out and me and my six friends were ready to meet Miss Dion before her performance.
Because I didn't want to show up empty handed, I had prepared the drawing for her you see in the photo. The idea for the gift was to combine my character Gaston from "B & B" with her and that "other" hit movie she was part of.
When I handed it to her she said very seriously : "You know, I've been given things over the years, but this is very special. But let me ask you, is Gaston going to hold on to me or drop me in the ocean?"
She surprised me with that question, and the only answer that came to my mind was: "Well, he didn't get the girl in his last movie, so he's probably going to hold on to you...but be careful with that guy !"
There was a photographer standing by to take our picture, so we both held the drawing for a photo. All of a sudden Celine goes:"No, no, no.....let's do the pose from your drawing."
So here I am finding myself playing Titanic with Celine Dion.
You can see from my grin that I had a good time, and her show afterwards was fantastic. 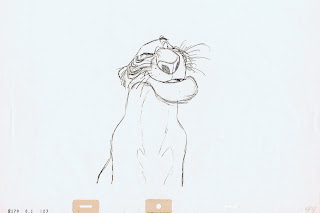 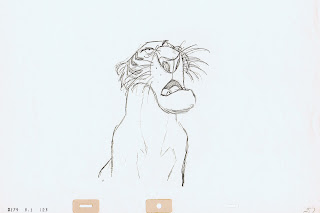 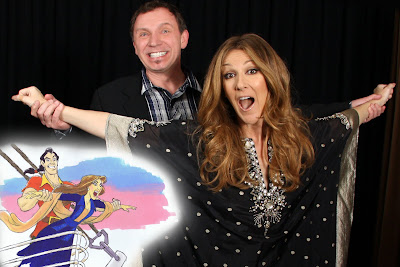