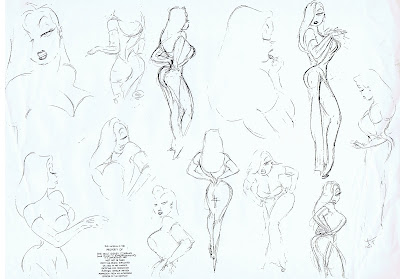 Jessica's supervising animator was the incredibly gifted Russell Hall.
Russell had been working for Richard Williams for quite some time, and it was decided early on that in order to ensure Jessica's consistency in the animation, one animator should focus just on her.
I remember it took Russell a little while to get a hold of the character, the issue being how realistic or cartoony the design and the animation should be.
In the end he created this Femme Fatale, who left male viewers all over the world sort of stunned and surprised, since they found themselves very much attracted to this animated character…in an obvious way.
Just look at these fantastic animation roughs above!

Here is a group photo with a few members of the Roger Rabbit animation team.
Russell is the one with a white shirt  on the right.

A Christmas card from Russell Hall's studio in London, sent after we had finished Roger Rabbit.
It shows a variety of characters from commercials he animated over the years. All of them great! 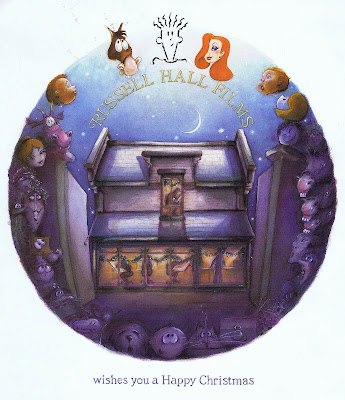 Check out this mid 80ies advert Russell animated for Listerine;