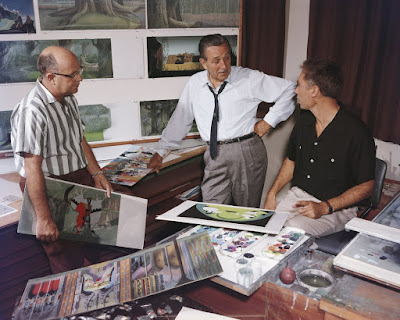 This incredible hi/res photo surfaced online recently. Walt Disney is dropping by Eyvind Earle's office, it looks like a late afternoon meeting sometime during the late 1950s. Walt loosened his tie, and his right arm is leaning on one of Earle's exploratory paintings, which is pictured below. Casual photos from behind the scenes of Disney animated films are rare, and this image takes you right back in time when Sleeping Beauty was in production.