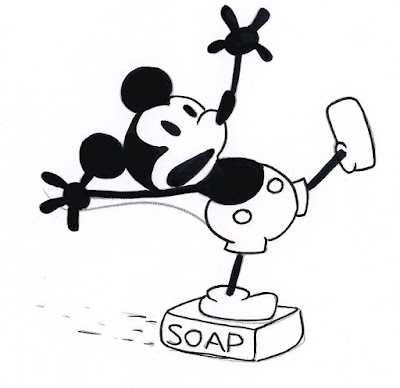 The ever changing appearance of Mickey Mouse over the decades makes for some fascinating study.
Some people might wonder why his look changed at all, wouldn't this confuse audiences?
The thing is that all great artists go through an evolution, they get better and their art improves. With some though, creative juices slow down with old age, and the polished quality from their earlier work might fade visibly. The energy, enthusiasm and sense for experimentation seen years ago is lacking.
To a certain degree Mickey was a victim of such a development.

There is plenty of enthusiasm as well as experimentation going on in the drawing above from the early Ub Iwerks era. Animator Les Clark was also working on Mickey and Minnie at that time.

You can see in the following sketch how young Fred Moore handled the character. He added his unique sense for appeal, complex draughtsmanship and elasticity in Mickey's movements.
The film is Pluto's Judgement Day from 1935. 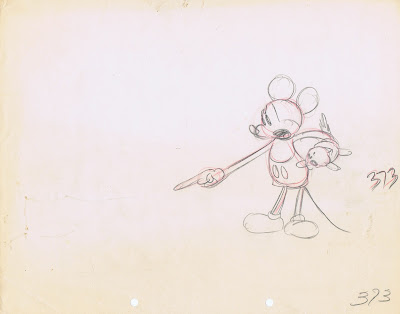 I am not sure who animated this sequence from Magician Mickey from 1937, perhaps Ed Love. Drawing and motion are wonderful and quite gutsy. 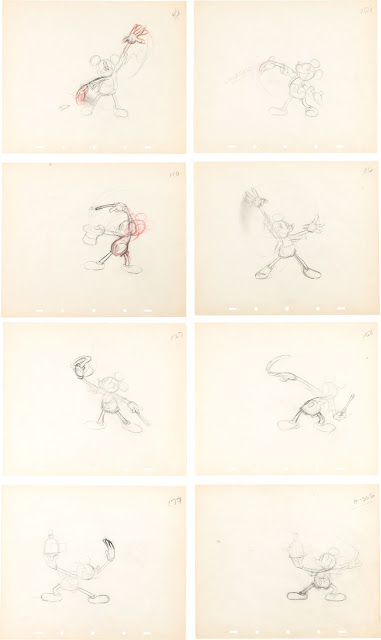 By 1938 Frank Thomas infused Mickey with superior acting (broad and subtle) for The Brave Little Taylor. The whole section in which Mickey demonstrates to the King and Princess how he "got seven on one blow" ranks as some of the best character animation ever done.

Fred Moore animated this scene from the film, where Mickey notices the Giant approaching. 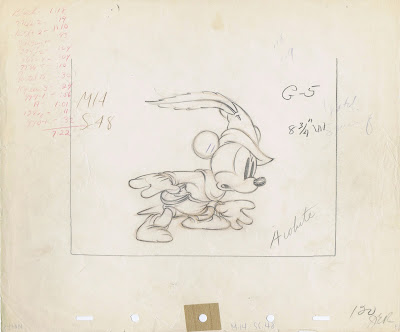 By 1939 the design for Mickey's eyes was altered, which allowed for more believable expressions. Frank Thomas animated this encounter with a bear in the forest for the film The Pointer. Here again, top acting.
Mickey tries to convince the bear to spare his life because he is a famous personality "You know...Mickey Mouse". 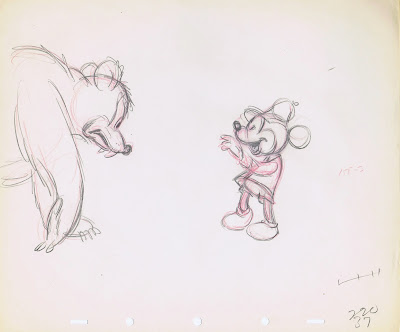 Fred's model sheet showing how Mickey's new eyes work. He chose to re-draw a few poses from his own animation from The Brave Little Taylor. (The last three on the sheet). 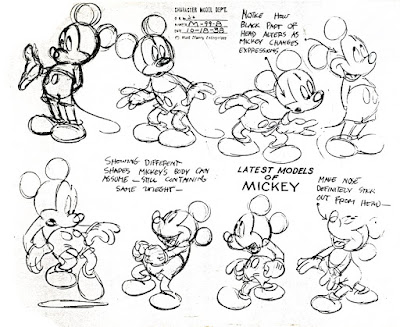 A couple of great cels from The Sorcerer's Apprentice, 1940. By now Mickey could do anything, even conduct the universe.
The second scene was animated by Les Clark. 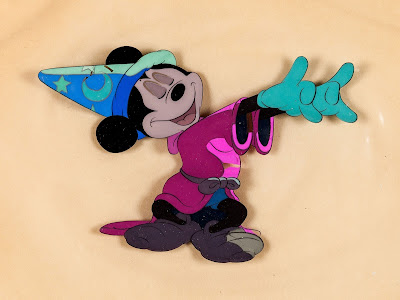 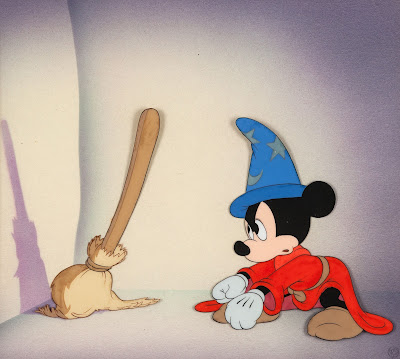 A great sketch by Fred Moore. Mickey looks back apprehensively toward the Sorcerer leaving.
Those always round ears never follow the laws of perspective, yet for some reason this cheat seems acceptable. 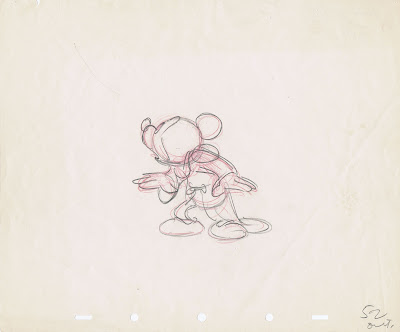 Fred drew key scenes with Mickey and Minnie for The Nifty Nineties, 1941. By this time the character's torso became smaller while his nose, hands and feet were enlarged. Extremely fluid animation. 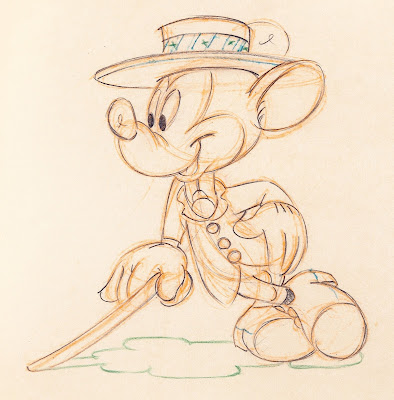 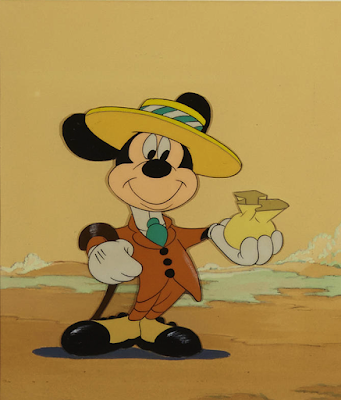 For The Mickey Mouse Club, starting in the mid 1950s, Mickey announced the show based on its theme. Ollie Johnston animated this intro for Monday, Fun with Music Day. 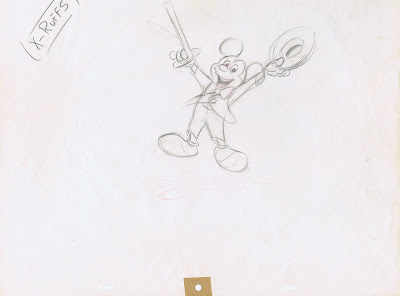 The cels had a thicker outline for the character, while interior lines were kept thin. It was thought that this look would read better on TV sets back then. 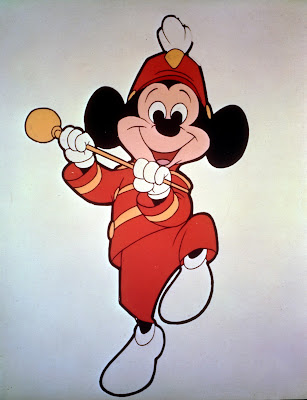 Some of the last classic short films featuring Mickey Mouse were Pluto's Christmas Tree and The Simple Things. (1952 and 1953). Fred Moore drew Mickey in a somewhat flattened graphic style, which still looked good, but completely lacked the spirit of earlier incarnations. 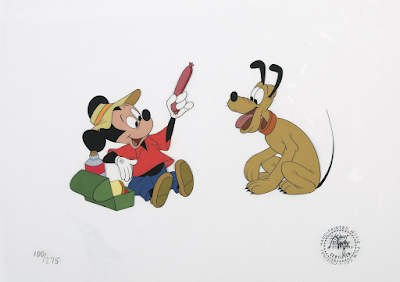 Disney artist Tom Oreb came up with this version of Mickey, which was meant to be used for advertisement commercials. Great modern graphic design, but -again- lacking the original's personality. This mouse is a used car's salesman. 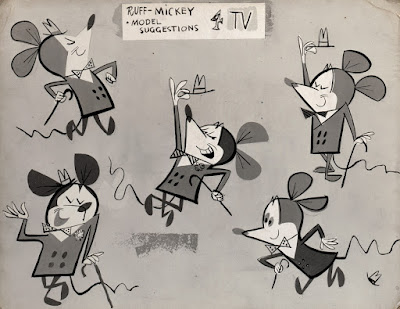 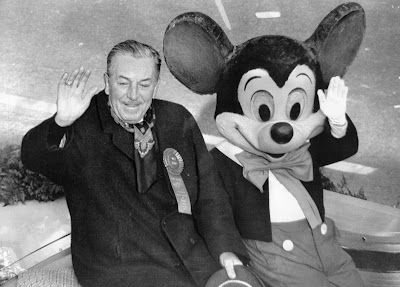 I am not including recent CG and 2D Mickey updates. While I applaud the effort...but no, no, not the real thing.