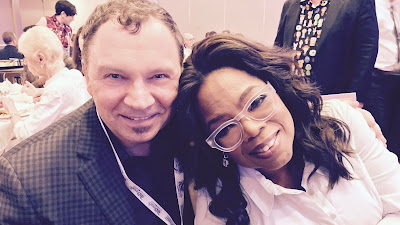 Look who I was hanging out with at the recent D23 Legends lunch!
I actually had met Oprah before, way back in 1995. Disney had just purchased ABC, when management called me to let me know that Oprah would be stopping by my office. All of a sudden I found myself trying to make small talk with one of the most famous people in the world. There were also Disney management folks present as well as a few members from Oprah's team.
So this is how the visit went:
Oprah right away notices the maquette of Scar on my book shelf. "Did you draw Scar?" she asks me.
I said:"Yes."  "Tell me, all my gay friends say that Scar is gay...is he gay?"
O-k-a-a-y-y-y, how do I answer that, I thought for a split second. Well...truthfully of course.
I remember saying something like this:"I can see why people might assume that, but I never thought of Scar being gay. In an early version of The Lion King we had a lengthy sequence in which Scar is coming on to Nala, and offers her to rule the kingdom with him. She refuses and scratches his cheek."

There you have it, Scar is straight. And while I am at it, so are Gaston and Jafar...at least as far as I know.