Before I scanned these two drawings for this post (I traced them from Frank and Ollie's book Too Funny for Words) I saw something in them that seemed odd.

First of all though, these are two absolutely fantastic key positions. How much bolder can you get ?! The matador had just exposed his chest in a last effort to challenge Ferdinand to a fight. But the bull only notices the tattoo of a flower which he starts licking affectionately.
The staging of the lick in the first drawing is already crazy, but it goes on from there. The tongue moves from the chest on all the way up to the jaw in one gigantic stretch.

Here's the funny thing: By the time the lick is in it's extreme position and the matador's body is fully stretched, his jacket fits tight on him now with the tie in place.
Logically this makes no sense. I assume that Ward Kimball, who animated the matador, didn't want to go through the business of having him put on his jacket afterwards.
I studied the scene on DVD, and realized that you just follow the main extreme action. The "morphing" of the jacket is a clever cheat, but you don't notice it unless you look for it.
Ferdinand was animated by Milt Kahl.
These guys, even at a young age, sure had fun, and they knew what they were doing. 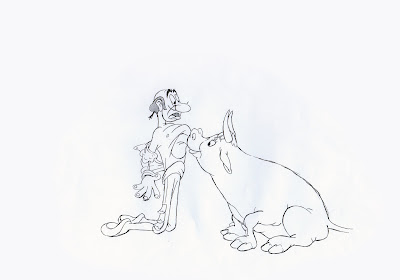 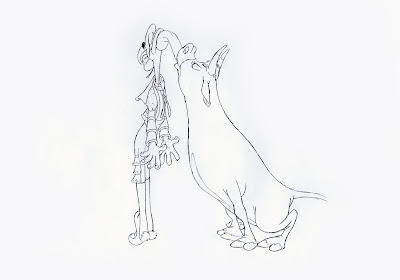