A Lesson from Frank Thomas

…on how to draw Merryweather, one of the three fairies from Sleeping Beauty.
Frank notes on the first sheet, these instructions were probably meant for assistant Dale Oliver.
What's so fascinating about these is that they give you an insight into the animator's thoughts on the character's construction and design.
As Ollie Johnston states in the documentary "Frank & Ollie", Frank analyzed everything very rigorously in preparing a scene, probably more than anybody. 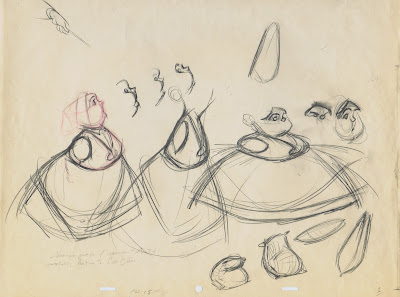 This is a great demonstration on how to squash and stretch Merryweather's body and face. The idea is that you can distort her body mass, but the amount of mass must remain the same.
Fred Moore pioneered this principle years earlier when he developed Mickey Mouse from a rubber hose design into a character that moved with more weight and expression. 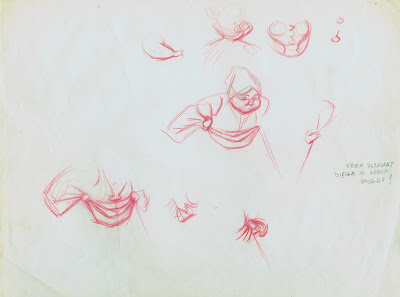 Even the design of folds in the costume's fabric needs to be carefully thought out.
Just about everything in Sleeping Beauty had to be specially designed. 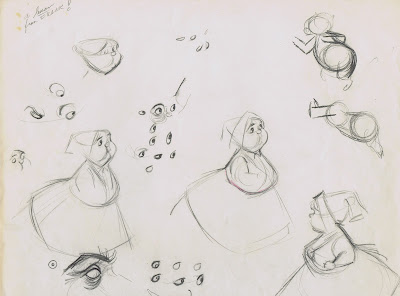 This is all about how to base the cartoon eye on that of a real person. To the layman Disney eyes might just look like an oval with a round pupil in it, but there is so much more to it than that.
Many components go into the eye unit. The eyebrow, the mass underneath, the upper eyelid, the eyeball, the lower eyelid, eyelashes etc. Even though the animated eye is much simplified, those components do play a part.