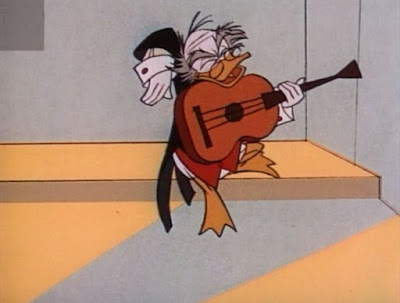 Ward Kimball animated a little musical number involving Ludwig von Drake for Disney's 1961 TV show Adventures in Color. At that time Kimball didn't enjoy animating Von Drake very much, he was still frustrated having fallen out of favor during the production of the live action musical Babes in Toyland. After disagreements with Walt over the film's story and casting he was "asked" to return to animation. This scene doesn't represent Kimball's best work, but it is still very good. It is also VERY long, and would be a challenge to any animator to keep the acting business fresh and inventive throughout. The lyrics go something like this:
"I am blue as I can be, green with jealousy, look what you've done to me. I've got those green with envy blues, I mean those red with anger blues. And there is orange, you gonna squeeze me with the seed. Need to mellow, yellow moon, so I can loose the green with envy, red with anger, purple passionate blues."
It is amazing to see how detailed and thorough Kimball's thumbnails were, Those are all the key drawings necessary...just add inbetweens. He went straight ahead and figured the complete scene out on one 16 field sheet of animation paper. 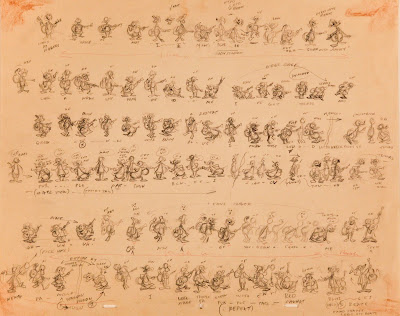 Check out the scene in this YouTube video, the scene appears about seven minutes into it.