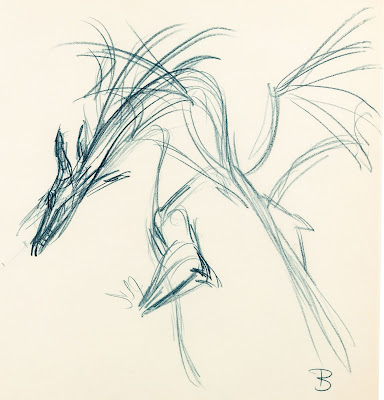 I posted about animator Eric Cleworth before regarding his work on the dragon fight sequence from Sleeping Beauty. It is a powerful piece of animation. Woolie Reitherman directed this section of the film, and if he hadn't directed at the time, he would have animated it himself. Known for his chase and action animation, Woolie was ideal to get involved in the film's dramatic climax.
But it was Cleworth who brought Maleficent to life as a horrific monster, while maintaining some elegance of the villain's human form, animated by Marc Davis.
I love everything about the rough sketch above. The flow within the pose as the dragon threatens and approaches Prince Philip. The search for stylized yet solid anatomy is breathtaking. A master drawing full of energy and guts.
There had been numerous design versions of the dragon before, this one comes close to the final design.
Eric Cleworth, underrated Disney artist.

Her is a link to a previous post on the same subject: