Marc Davis and Milt Kahl were the best of friends.
Milt often raved about Marc's incredible draughtsmanship and his artistry in general ("He makes me look sick"), while Marc admitted that his favorite animator was Milt Kahl.
But the two got along on a personal level as well.
Together with their wives Alice and Phyllis, they socialized, went to ball games,
and they all shared an interest in fine art.
Marc once said of his friend: "Milt is the kind of guy who , if I would go up to him and say, Milt I need $20.000, would not ask me why or what for, I know he would just give it to me."
The two often animated characters that interacted in the same sequences.
Milt did the Fairy Godmother to Marc's Cinderella, he did Peter Pan to Marc's
Tinker Bell, and Roger and Anita to Marc's Cruella de Vil.
It must have been in 1975, when Milt gave Marc this amazing oversized drawing,
which celebrates their friendship. It shows a caricature of the both of them in a
sort of Picasso-esque drawing style.
It's a very unique piece, and Marc treasured it.
I want to thank Alice Davis for letting me post the drawing. (She is also kind enough to let me show you some of Marc's gorgeous animal sketches in a later post).
Following are scans of animation rough keys  with Aurora and Prince Phillip ,
(I'll let you guess, who animated who).
Can you believe how tight these are drawn ? When you enlarge them you can see wonderful subtleties in their faces, hands etc.
They were animated on two different levels, I combined them here on to one.
Enjoy the pose test as well. There is an animated camera move toward the end of the scene, that's why they seem to pop over toward screen left. 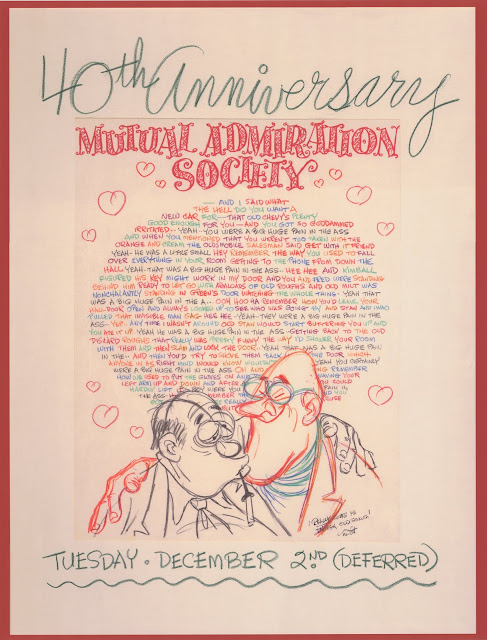 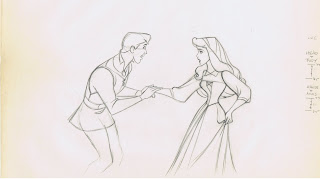 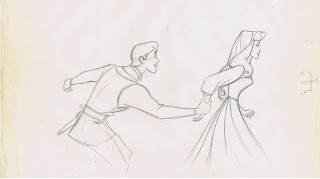