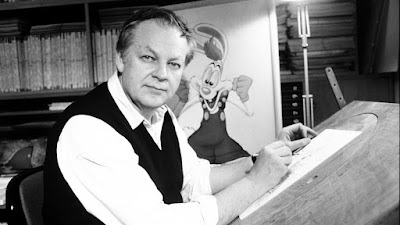 Just like all of you I was saddened to hear about the passing of Dick Williams.
This is how I remember him most, working on Who Framed Roger Rabbit. We had met before this, in LA at Academy events and film festivals. I shared Dick's profound enthusiasm for animation, and we enjoyed just talking about Disney, Warner Brothers, or the medium in general.
One day he called me and said that he might work for Disney after all. There was this high level project in development at Disney and Amblin, a combination of animation and live action. But it would have to be done in a way never attempted before.
I recall him coming to my house for dinner and telling me a little bit about the film whose main character would be an animated rabbit. Before leaving, Dick pulled out of his car's trunk a model sheet of Roger filled with his drawings.
A few weeks later he phoned me and asked if I was interested in joining the animation crew in London to work on the film. Of course I would still be employed by Disney. Here's the thing: I said no, I had just been in LA for a few years, and that I wasn't ready to return to Europe.
I think another couple of weeks passed and animation producer Don Hahn and Dick asked me out for a Mexican dinner. I believe it was Don Cuco in Burbank.
Anyway we had dinner and margaritas... and I signed on.
One of the best decisions I ever made regarding my professional career.

After my flight to Heathrow I was picked up by a driver, not to my new apartment, but straight to the studio in Camden. There was no time for jet lag...here is your first scene...GO!!!
It had the ostrich from Fantasia in it, interacting with Eddie Valiant. Photostats and all.
It really was the beginning of a terrific year, there was a buzz around the studio I'd never experienced before. We really were doing things that had never been done.

Here is the link to a post about that first ostrich scene:
https://andreasdeja.blogspot.com/2012/03/my-first-scene-on-roger-rabbit.html 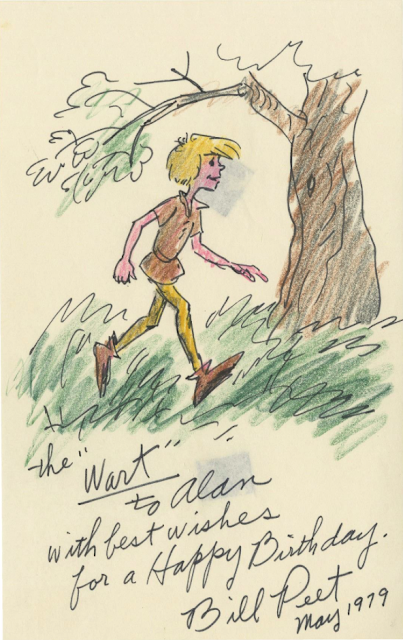 Here again are some interesting pieces up for auction.
Apparently a young Disney fan named Alan celebrated his 10th birthday in 1979. How he was able to get so many Disney artists (some of them had already left the studio) to do character drawings for him is astounding. And there are many more pieces than I am showing here. 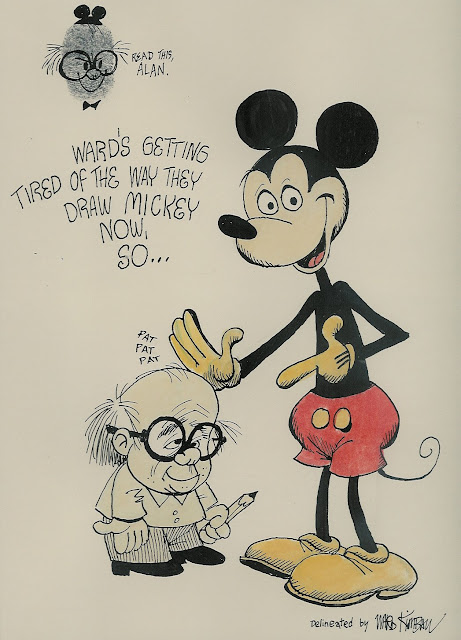 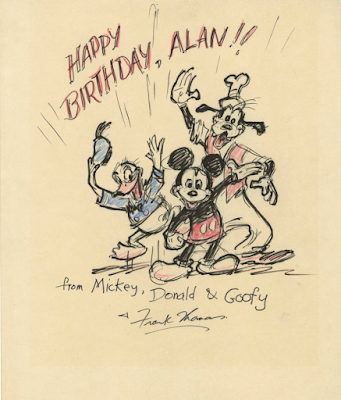 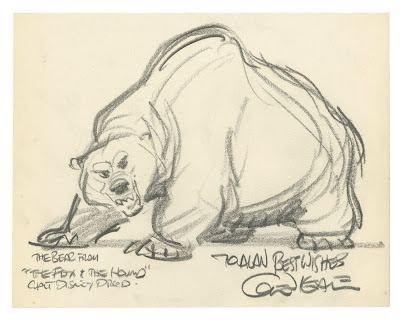 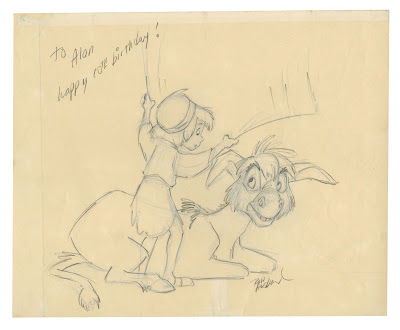 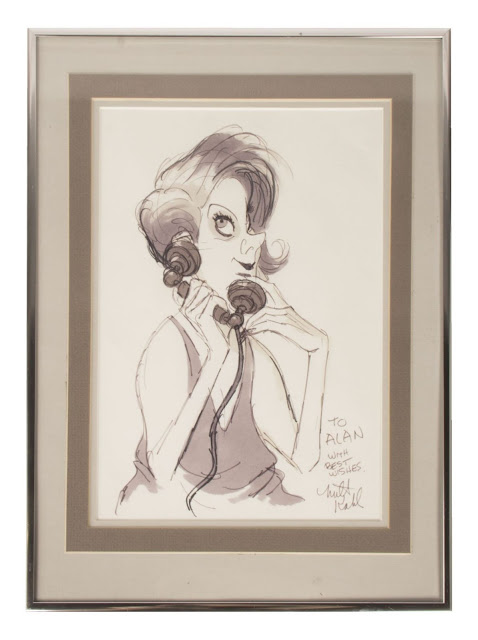 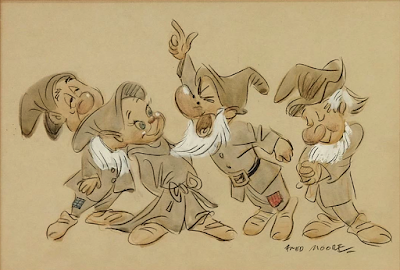 An interesting piece is currently being offered at auction. Fred Moore drew these four dwarfs ( Sleepy, Dopey, Grumpy and Bashful) probably sometime during the late 40s or early 50s.
You can see how Fred's drawing style had changed.
From round, thoroughly dimensional designs for the original film to spunky, graphic depictions of their personalities.
Of course I like both approaches, because Fred Moore, at any time, couldn't make a drawing without tremendous appeal.
So much fun to discover this sketch!

Here's how Fred drew the dwarfs for Snow White and the Seven Dwarfs:
https://andreasdeja.blogspot.com/2016/02/dwarfs.html 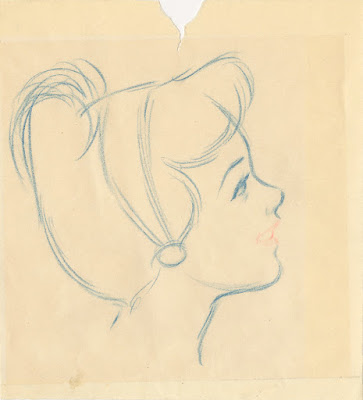 I have often wondered if there are any Disney feature film characters that didn't get the final Milt Kahl polish, when it came to finalizing the designs.
I have never seen any Cruella De Vil sketches by Milt Kahl, or Luzifer, the cat, or Tony and Joe from Lady and the Tramp. But Milt did have something to do with the look of most Disney characters.
As he proclaimed in his episode from The Disney Family Album: "I WAS the Disney style!"

Well...he sort of was. In most cases his final designs were based on other artists' rough concepts.
Bill Peet, Joe Rinaldi, Ken Anderson and others.
So I shouldn't be surprised to find the above sketch of Cinderella from the dance sequence with the Prince. Currently for sale at Van Eaton Galleries.
That, for sure, is a Milt Kahl drawing. Eric Larson animated those scenes. There were based on live  action reference and needed to be drawn subtly and perfectly. I bet you Milt even did key drawings for the Prince in this scene. It might be Eric's animation, but the solid and appealing drawing style is all Milt. 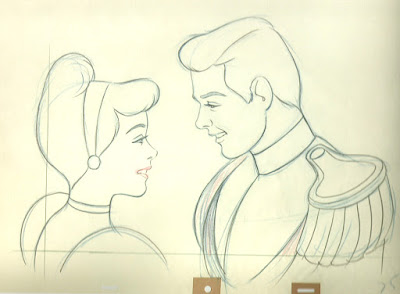 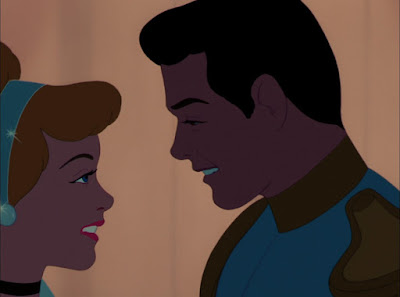 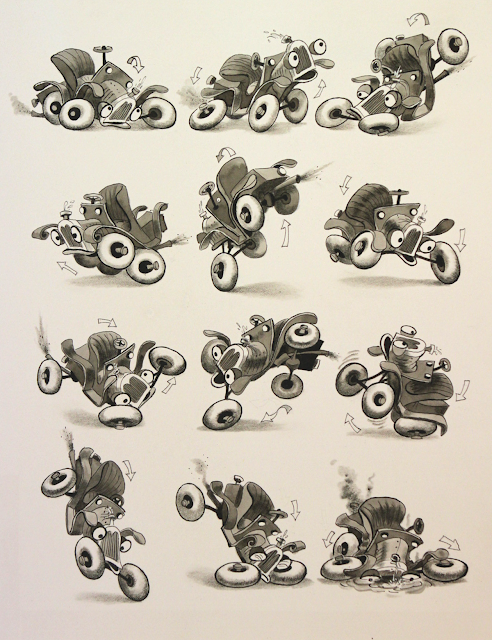 An absolutely stunning exercise by Ward Kimball in animated motion range for a vintage cartoon car.
This was published in the magazine Asinine Alley,  also known as the Horseless Carriage Gazette.
I brought this piece to Pixar's attention, before they started the Cars franchise. 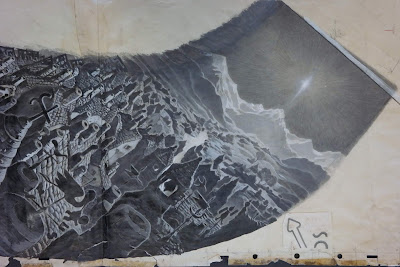 I am not really sure what to call this astounding piece of artwork from Pinocchio.
It looks like a layout for a camera move from the opening sequence. But it is in color.
Layouts were drawn usually in pencil before the background artist added the final mood in color.
I suppose this sketch was used for an early store reel, and since this is a very moody nighttime sequence, some color was added to help "sell" the camera over the village rooftops idea.

I re-watched the film's opening sections the other day. What a reminder for just how great this art form can be. Illustrations, paintings, drawings. In stark contrast to the hyper realistic approach of today's animated features.
It's like "art" has been sucked out of the medium.