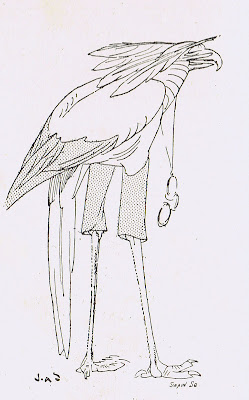 I wonder if Milt Kahl ever saw this illustration by James A. Shepherd from his 1894 book "Zig Zags at the Zoo". No idea, if the vast Disney Library had a copy of it.
But it looks like the Shepherd drawing might have been inspirational for the design of the Secretary Bird in the film Bedknobs and Broomsticks.
Milt Kahl animated most of the scenes with this character, who constantly has to put up with King Leonidas' volatile temper. The Lion's roar is so powerful, it repeatedly messes up the Secretary Bird's outfit. Those scenes where he puts himself together again, straightening out his tie and adjusting his cufflinks are among my favorites from Milt's later work.
I'd like to talk about these animated scenes in a future post. 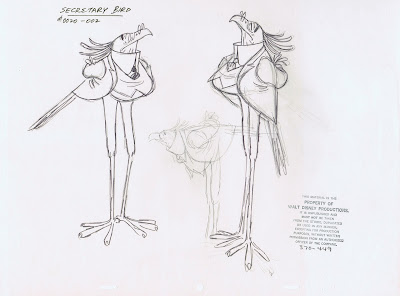