This kind of thing happens to me once in a while (and it just did again):

Before animating a new scene I plan out the staging and acting of the character(s) in thumbnail form.
Once I feel that this is probably the best way of doing it, I start roughing out my first pass on animation paper. I think I got this under control, when suddenly I loose confidence in the way the rough pass is coming along. The poses look funky, and flipping what I have done so far doesn't encourage me to keep going.
Early on in my career I would throw everything out and start over again, without even pencil testing anything. The stuff just felt like it was going nowhere.
What I've learned over the years, when this kind of a situation occurs, is to stay with the scene and FINISH the rough pass anyway. BECAUSE:
Even if parts of the scene don't work for me, there is always some part that does. And based on that, I can now rework the scene so that everything works as a whole.

And a good attitude to have is this: let me do the fixes right now, not later or tomorrow, right now when everything is fresh in my mind. So by the end of the day you know you solved the problem.
The next day when I start tying down the drawings I feel confident again, because I know that the bare bones of the scene are working.

There are even times like this: I am thinking the scene is going downhill, but I stay with it and finish the first rough pass. I pencil test it, and by golly, it doesn't look so bad after all.

Yet again, there are occasions when the whole thing has to be thrown out, because the acting idea is wrong. This happened to me while animating Mickey on The Prince and the Pauper.
Pauper Mickey is walking through the Prince's palace, when he discovers his mirror image on the shiny floor. The storyboard suggested that he is delighted and does something fun to acknowledge the smooth floor.
So I posed out something like an ice skating scene. Way too broad! I started over with a different idea, where Mickey does a little dance with his own mirror image, before crashing into some armor.
I kept the dance subtle while the crash was broad. To this day I think this became one of my better scenes. 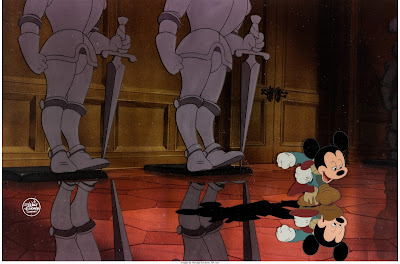