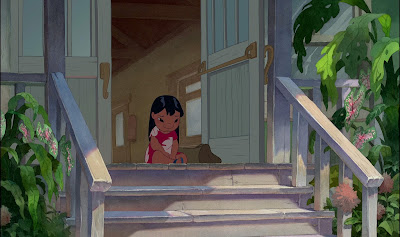 Fifteen years ago the film Lilo and Stitch had its US premiere.
Thinking about this movie now makes me realize that it turned out to be one of my favorite projects I ever worked on. The story and the characters are highly unconventional yet very memorable and emotional. I remember that everybody who worked on the film felt so lucky to be a part of something extra special. (Just look at this breathtaking background.)

Lilo and Stich touched many people. People who identified with situations that had never before been portrayed in a Disney animated film.
It touched me, too, as an animator. I remember tearing up a little while working on certain scenes, like the hammock sequence. How crazy is that?

Read this just published article by Damian Alexander for Teen Vogue. It shows you what an impact an animated movie can have.

I haven't watched Lilo and Stitch in many years, I think its time to take a break and revisit what we were doing at Disney over fifteen years ago.