My First Scene on "Roger Rabbit"

I had just flown over to London to join the crew who produced the animation for "Who Framed Roger Rabbit". A taxi took me from Heathrow right to the studio in Camden, the north of London.
I left my luggage in the lobby, and was shown around the new studio set up.
By the time I got to say Hello to Dick Williams, there was little time for small talk.
He had a scene for me to get started on, right then and there. So forget about your jet lag and dive in.
Most everybody was animating on the Maroon Cartoon for the opening of the film.
But Dick wanted me to do the scene with Bob Hoskins walking out of an office, passing a Fantasia ostrich as he moves downstairs. Dick said something like: "You're the Disney guy, it'll be great."
"Great" I thought, for Pete's sake, I had never done animation combined with live action before, what if it turns out awful?
I was given a huge box with photo stats of the whole scene. When I studied them I noticed of course that the camera was in constant motion.
HOW ON EARTH AM I GOING TO PUT THE BIRD INTO THIS?? I remember my mind started to panic.
Then, a bit of relief, I noticed that you wouldn't see the ostrich's legs, they were covered up in the live action. That meant potential foot slippage wasn't an issue here. Sigh….
Anyway, after analyzing the ostrich from old model sheets and thumb nailing the action, I just animated the character straight ahead on two's. I based it on the camera move and the perspective as best as I could.
Dick Williams liked the rough animation and thought the little attitude gesture on top of the stairs was fun. He only suggested a small change. The ostrich should look screen right at the start, then screen left, it would make it more interesting. An easy fix. I added the jumping frog with more confidence, and the scene was sold!!
I was so relieved, I felt like a million bucks.
Later on this turned out to be the first animation/live action scene in color that got sent from ILM, after they did the final compositing, including highlights, shadows etc.
It looked sooo cool, everybody was thrilled.
But we had a long road ahead of us to finish the movie.
Here are a few character studies and thumbnails, done before animation. 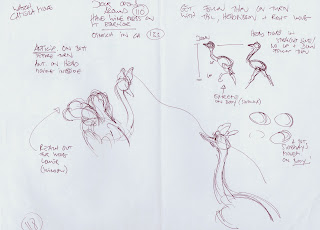 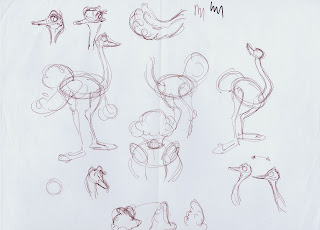 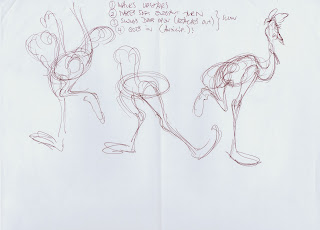 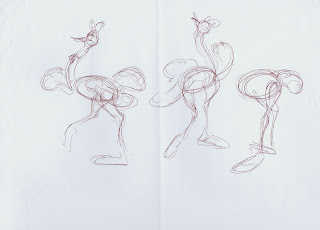 This is a cel set on a photo print, no tones on the character here. 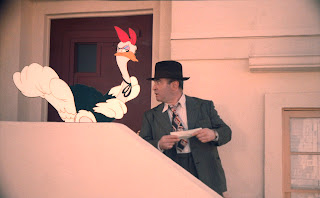