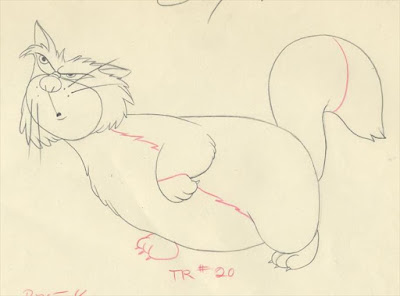 Two villains, one from the film Cinderella, the other one from Robin Hood. These two scenes have something in common, both characters are eavesdropping. Lucifer -animated by Ward Kimball- is pressing his ear against the Stepmother's bedroom door in hopes of hearing more orders for Cinderella, something he obviously enjoys.
The Sheriff of Nottingham's pose -by John Lounsbery (with a little help from Milt Kahl) - is almost identical, as he tries to listen in on a conversation between Friar Tuck and Otto. It is highly likely that they are talking about Prince John's taxes.
Both animators chose to flatten one side of their character's head, the one which is pressing against the hard surface of the door. To show soft material like fur reacting to a hard surface like this is very convincing and satisfying to see.
The pupils are looking upwards in anticipation of any revealing news. 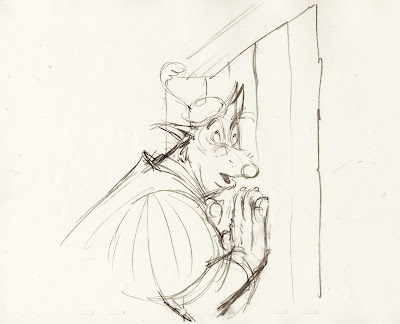