Here are a few more staging studies I did a while ago.
All of them fantastic examples of outstanding draughtsmanship with focused arrangements of shapes and lines. Milt Kahl drew most of them except for the last two images.

Madame Bonfamille is offering Frou Frou a sugar cube.
There are plenty of lines which connect the two characters visually. Madame's reach is supported by the coat folds in her upper arm. And what beautiful hands, the open one, but also the one holding the package. Those bars from the coach ending at the horse's neck and the reigns guide you toward Frou Frou's head, which is tilted downward toward the hand.
A graphic masterpiece. 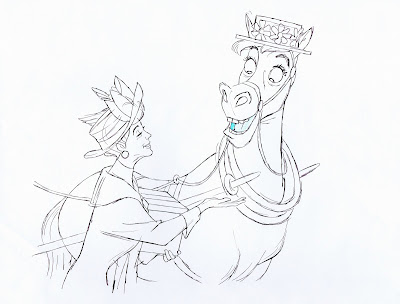 Robin Hood and a wolf composed in a dynamic triangle.
A lot of the line work points upward to the area where the swords make contact, but the characters' heads communicate back and forth. Robin's hat and the feather, his ear and his nose point to the wolf, and the wolf's ears and the lines in his hood revert back to Robin. 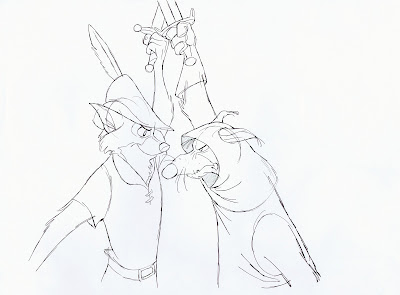 "You are too soffft!"
Medusa wiggles Snoop's nose, and that's what Milt wants the audience too see clearly.
Medusa's arm seems to create a little detour toward the area of interest, but all other lines support the overall staging. Her neck, the flow of her hair and the direction of her nose. The back of Snoop's body connects with the temple of his eyeglasses which points to Madusa's face. 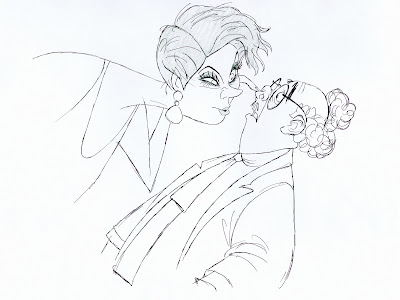 The King from the Island of Naboombu ellbows the Secretary Bird.
Plenty of lines lead to the characters' contact . Hysterical reaction on the bird. 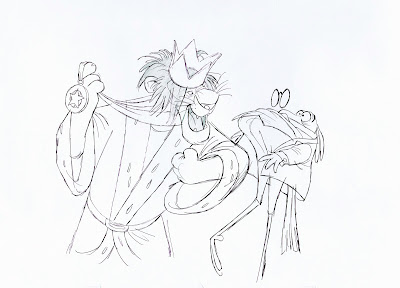 Roger and Anita during a playful moment.
The drawing style is very shape oriented, but because there is great variety in the shapes' forms and sizes, nothing looks flat and awkward. It is almost like a carefully assembled mosaic with an end result full of rhythm. And what great profiles on both of their faces! 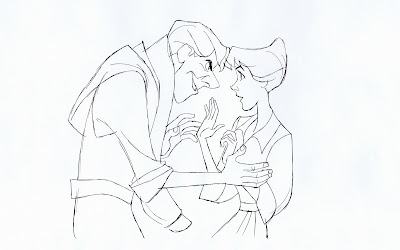 John Lounsbery animated this scene with Mim as a snake threatening Merlin as a mouse.
Snake bodies always give you an immediate, positive direction. Merlin's straight uprise pose contrasts the snake's  curviness. It says something about their personalities, too. 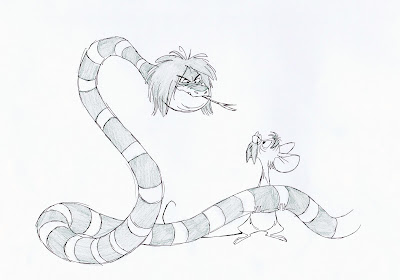 This is a lovely Ollie Johnston scene.
Baloo and Mowgli are having a great time in the water. Their body language signals a sort of explosion. All limbs are stretched outwards to emphasize a particular musical beat. 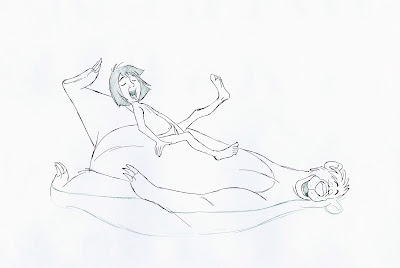