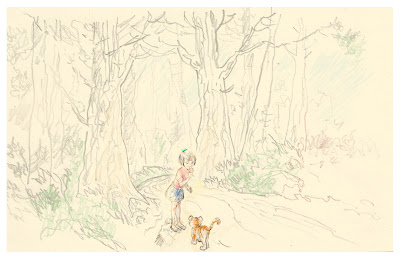 Here is a little vis dev piece for my film Mushka. The bg/layout is by Peter Moehrle, and captures the sketchbook look of the film very well. So this is could be a final frame from the film.

On a different note, I will have a report a little later on the fantastic "Roger Rabbit Academy Event" from last night.
The film looked great on the big screen, and it was fun to catch up with friends who worked on the movie, wether they were on the panel or in the audience.
We all wished of course that Richard Williams could have been there.