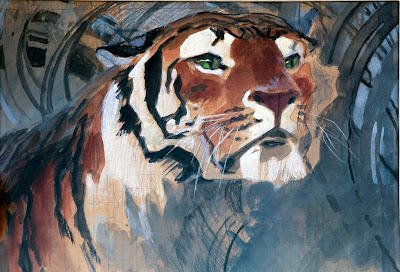 …by three different artists.
The first one is by Heinrich Kley. I purchased it quite a few years ago during a visit to Munich.
My first impression of this piece was straight forward realism. But the more I studied it the more abstractions I found. Kley played strong horizontal, vertical and diagonal lines against each other. This is a very organized head study of the animal, volumes are simplified to a point where this almost becomes a caricature. I just love the design of the black stripes with its thick and thin lines.
There is a grid drawn over this oversized sketch, which almost certainly indicates that Kley did this as study for a large mural.

Fritz Hug's tiger also has a sketchy quality with typical splashes of paint going right over the image.
I like the fact that he corrects certain parts of the body, but you still see the original position of the rear leg, the elbow and the front left paw. A beautiful raw study, probably done at the zoo. 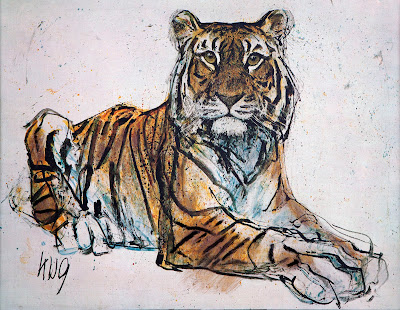 Liu Jiyou's illustration on rice paper was done at his studio.  Before painting he would come up with endless sketches in front of the animal until he felt confident enough to draw specific poses and compositions at home. The angle and perspective of the tiger's head is stunning. 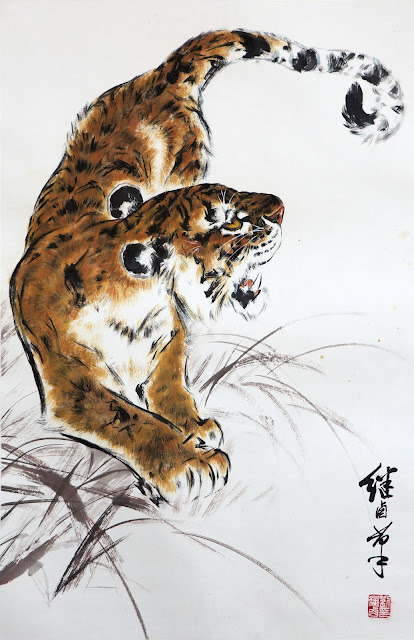 Researching other artists' approaches to drawing and painting tigers has become part of my studies in preparation for my film "Mushka".