How rough, how clean ? II 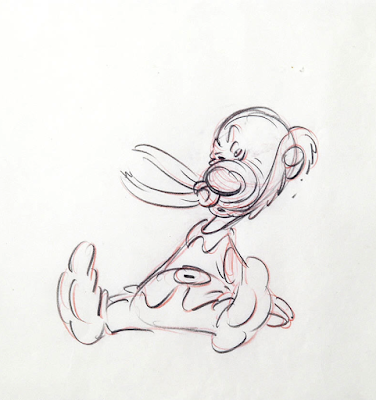 Another batch of animation drawings that show a variety of styles. The Sneezy drawing above shows
that animator Fred Moore worked very fast and intuitively. Since he designed the final models for all
dwarfs, the clean up artist didn't need to change anything. Proportions and volumes are all in place, only a few loose details needed to be redrawn more specifically. (Like a line that separates the
sole from the shoes' top).

Believe it or not, but this Kahl rough drawing of Pinocchio drawing as a real boy needed to be altered.
The size of his hands is much smaller in the final version of the scene. Milt most likely redrew a few hand key positions, so clean up knew how to handle the new size correctly. When it comes to hands, I can not imagine Milt leaving any changes to someone else.
Also, I remember him saying how tired he was at the end of production on the film, he wished he could do those last scenes over. 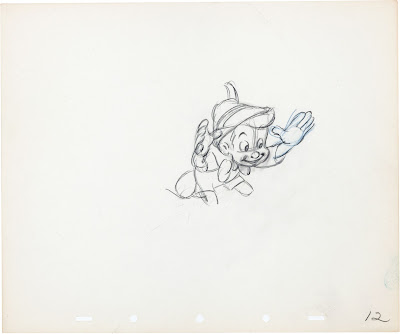 A rough from an early Art Babbit scene that was cut from the movie. Structurally there would be a bit of work left for the assistant. Hair, hands and upper body aren't quite as solidly drawn as the actual model of Geppetto. 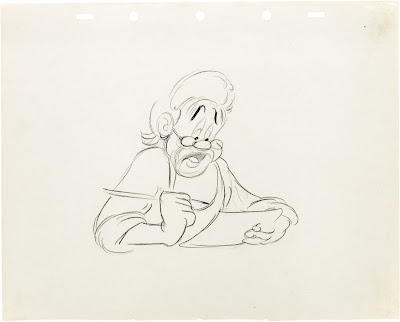 A very clean drawing of Cinderella by Marc Davis. I remember him saying: "If YOU don't draw it well, nobody else will do it for you." 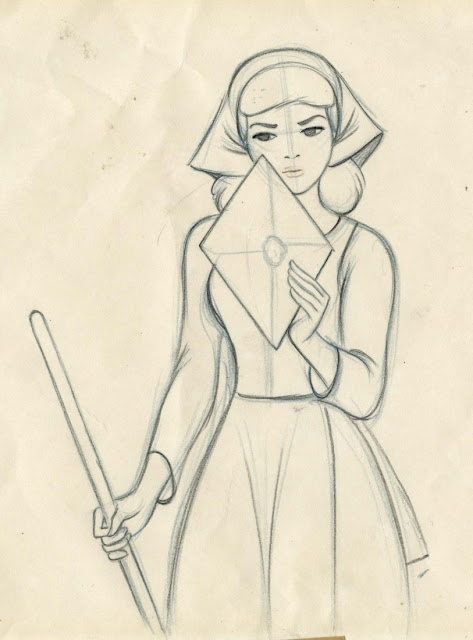 Ollie Johnston always had that light touch in his animation drawings, which allowed him to get through his footage pretty fast. Even at this speed Alice is drawn on model. A beautiful sensitive approach. 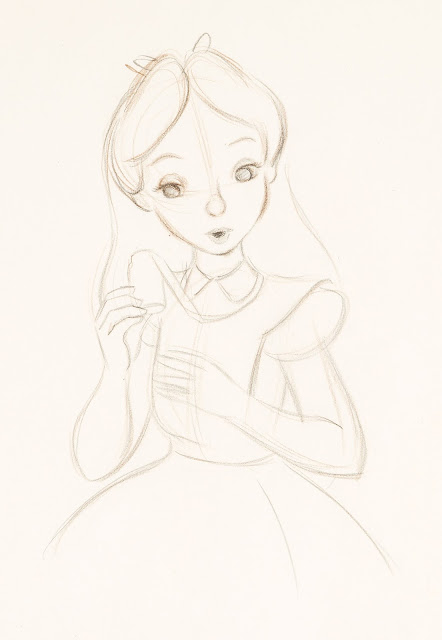 Milt became so confident and thorough in his drawing ability that nothing was left for possible misinterpretation. In this sketch he drew the upper body, while hands and legs were traced from a previous key drawing. (Those parts were not moving and held still.) 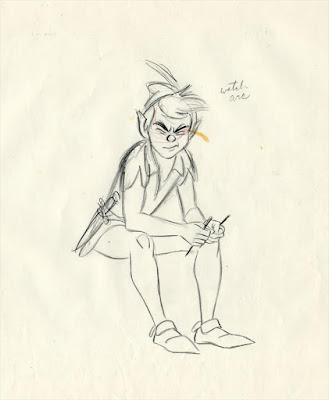 A lively key drawing of Peg by Eric Larson. All the clean up  assistant had to do here is find consistent patterns for all that moving fur. And that assistant was Burny Mattinson, who still works at the studio, in story. 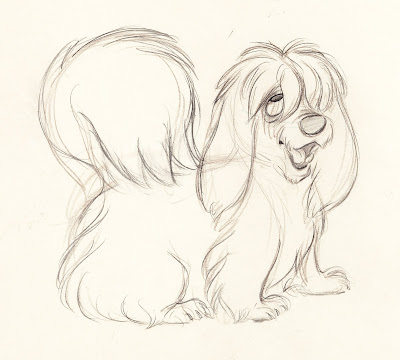 John Lounsbery didn't leave his assistant guessing, Everything in this drawing of Tony is beautifully worked out and designed in a clear way. John had great rhythm in his work and tons of appeal. 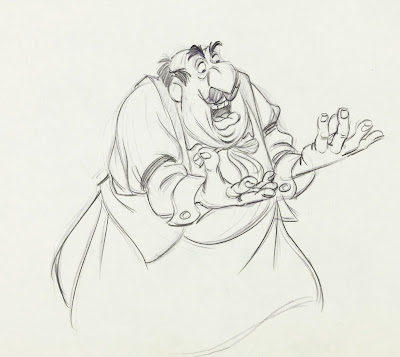 Another Lounsbery key drawing this one depicting the Mock Prince from Sleeping Beauty.
Without the owl's wing flapping, this whole idea might seem highly questionable as far as logic, but Louns completely sells the idea. 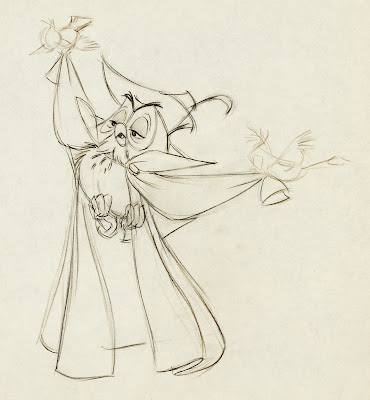 Maleficent by Marc Davis as a stylized graphic design. Look at the power of lowered eye lids, 'up to no good' evil. Marc's charts were always even, no key drawing was ever favored. You'd think animation timed like this would float across the screen, but somehow Marc's scenes still show contrast within the acting. It goes to show you, every Disney animator structured a scene his own individual way. 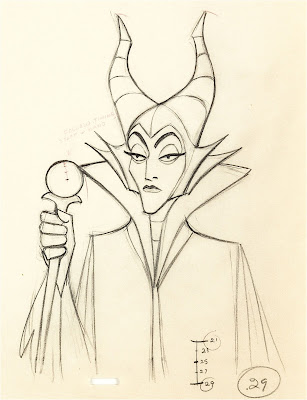 Lots of experimental, rough work was done on the Dragon by various artists. By the time animator Eric Cleworth started production animation, his drawings were crisp and very solid, as the second image shows. Amazing design! 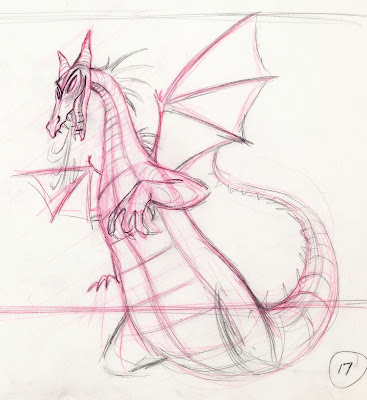 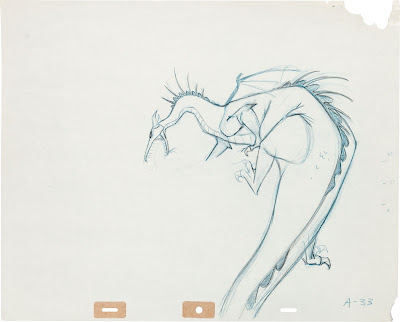 Another example of how gently Ollie Johnston puts his pencil to paper. Sir Hiss momentarily incapacitated. 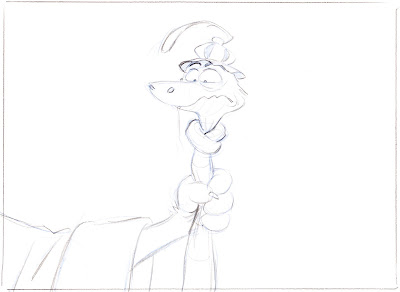 No greater feeling than seeing your OWN drawings on the screen. You can't blame clean up for the scene not looking good, it's all YOU. I know Marc and Milt loved the whole idea of Xerox. 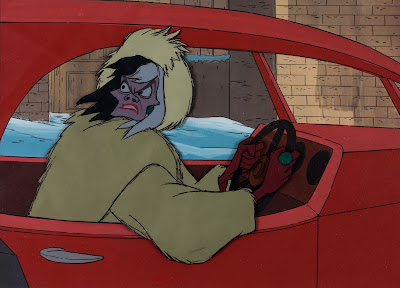 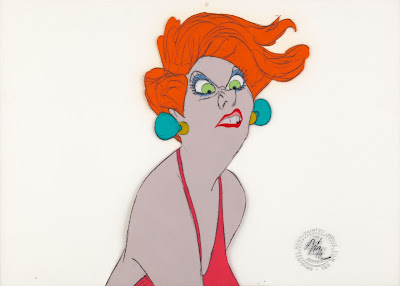 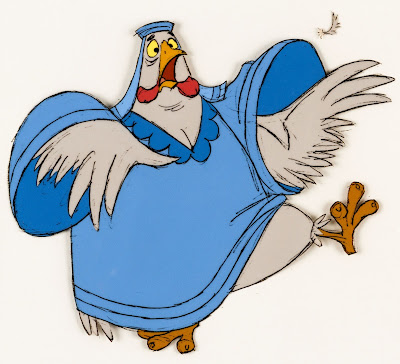